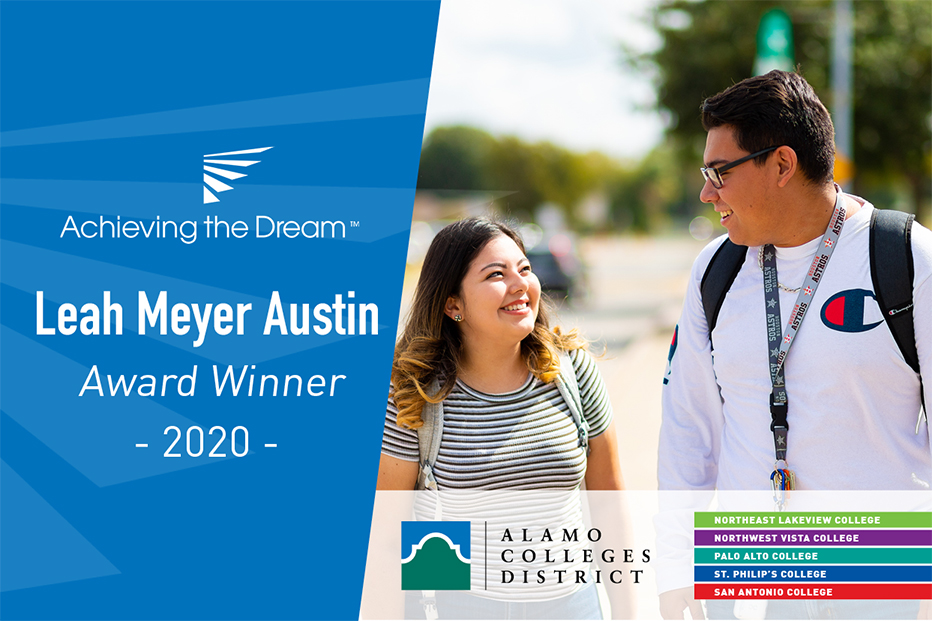 The Alamo Colleges District is one of only two community colleges in the nation to receive the 2020 Leah Meyer Austin Award from Achieving the Dream (ATD). This national recognition is given annually to a college or colleges in the ATD network that show measurable improvement in student outcomes driven by top-to-bottom cultural change in the institution.

“To be selected as a Leah Meyer Austin Award winner, a college must have the commitment to make big, bold changes throughout the institution,” said Dr. Karen A. Stout, president and CEO of Achieving the Dream. “Alamo Colleges has the courage to make those changes in everything that impacts the ability of their student to be successful.”

“The Alamo Colleges District Board of Trustees drew ideas from ATD’s best practices and principles and the institutional capacity areas, on which it modeled its strategic framework for measuring progress on student success,” said Alamo Colleges District Board of Trustees Chair Marcelo Casillas. “Today, focused innovations have yielded increases in student completion overall and in equity for our most vulnerable populations,” he added. 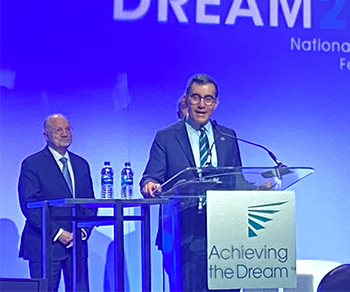 “At the Alamo Colleges District, we are increasingly focused on economic and social mobility because we know that a college credential provides a ticket to the American middle class,” said Alamo Colleges District Chancellor Dr. Mike Flores. “We use discovery, incubation and acceleration to build proof-of-concept at one college, then develop it and bring it to scale at another,” he added.

Alamo Colleges District showed how a system of colleges can work together to intentionally build a structure and culture organized around student success. Fifteen years ago, the colleges recognized their single-digit graduation and completion rates were untenable, given the context of a growing community, a struggling local economy, and high levels of poverty.

Joining Achieving the Dream in 2004 served as the catalyst for the district colleges to accept working together to align processes, become data-informed and clearly focus on student success and performance excellence. They formed core cross-college data and change-management teams to collaborate, innovate, and apply what they were learning from ATD network experiences. At the same time, their independence made the colleges natural laboratories for experimentation.

Last year, the Alamo Colleges District declared a “moonshot” of ending poverty in the greater San Antonio area by expanding partnerships to address economic and social mobility. The goal is to close the gaps among students of color, align workforce development programs to high-wage, high-demand careers and scale Student Advocacy Centers across the colleges to work for all students.

The Leah Meyer Austin Award was established in 2008 to recognize outstanding achievement in supporting and promoting student success through the creation of a culture of evidence, continuous improvement, systemic institutional change, broad engagement of stakeholders and equity, with particular attention to low-income students and students of color. The annual prize is given in honor of Leah Meyer Austin, former senior vice president for program development and organizational learning at the Lumina Foundation and emerita director of the ATD Board of Directors, whose visionary leadership shaped the development of Achieving the Dream.