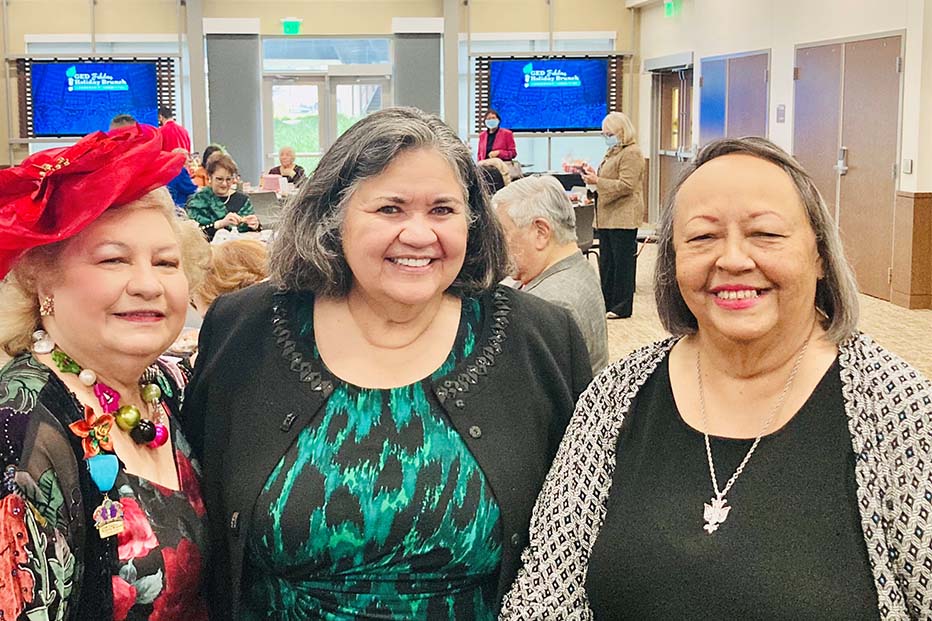 On December 4, the Fabulous GED Brunch raised a record $70,318 to support GED-to-college community programs at the Alamo Colleges District.

The event, chaired by Alamo Colleges Foundation board member Martha Tijerina, was created in 2008 by a group of over 70 friends who organize the brunch to raise funds and awareness to help students to complete their high school equivalency exam.  Norma V. Cantu, educator and chair of the U.S. Commission on Civil Rights, gave the keynote address.

Now in its fourteenth year, the event welcomed a virtual audience of several hundred, while more than 85 guests attended in person at the Alamo Colleges District Support Office.  Funds raised will support the three Alamo Colleges that currently offer GED community programs: Palo Alto College, St. Philip’s College, and San Antonio College.  Donations can help cover part of students’ cost of test preparation, instructional materials, testing fees, or scholarships to attend one of the Alamo Colleges once they have attained their GED.  To underscore the true impact of such generosity, the event featured video testimonials from GED students at each of the colleges.

Dr. Mike Flores, Chancellor of the Alamo Colleges District, provided welcoming remarks and some pleasant surprises: “We know our students confront many challenges in the classroom and they confront many outside as well.  We look forward to continuing this partnership with the Fabulous GED Brunch champions and eliminating barriers to access.  Our board is always asking us to reexamine our practices, so beginning in January 2022, the Alamo Colleges District will not be charging for GED tests.”  The announcement was met with applause, and Flores also shared that in 2022, plans will begin to expand GED programs to all five Alamo Colleges and the regional centers.

Dr. Flores was not the only speaker to bring good news.  Emcee Michael Quintanilla had the pleasure of announcing that the GED Brunch was welcoming its first “diamond” sponsor this year, then passed the microphone to a very special surprise guest.  Representing Kym’s Angels, a philanthropic fund started by Kym Rapier Verette and Glenn Verette, Yolanda Valenzuela thrilled the audience by presenting a check for $10,000.  Valenzuela thanked Tijerina and Quintanilla for their passion and commitment, mentioning her own father’s GED journey and the commitment Kym’s Angels has made to supporting education in San Antonio.

Keynote speaker Norma V. Cantu then took the stage, sharing her family story and emphasizing her intense gratitude for community colleges and what they have meant for her family.  Her parents met at Texas Southmost College, where her dad was working to obtain his GED, which led to a better career for him and which later inspired her mother to later complete her Bachelors and Masters degrees to become an educator and school administrator.  Cantu spoke fondly of her mother inspiring countless other family members to pursue better educational opportunities. “When one person does it in the family, everyone does it in the family,” Cantu proclaimed.

To close her remarks, Cantu recognized the hard work and distinction that led to the Alamo Colleges District receiving the Malcolm Baldrige National Quality Award in 2018, and being the only community college system ever to do so.  She cited the rigorous process of systems management and quality improvement required to win the Baldrige Award and extolled the Alamo Colleges for better serving its students and community: “The Alamo Colleges are an estrella maravillosa—you are the most bright star.  At night when it’s dark, and you can’t see where to go, and you see that bright star, that’s what this system is.”

Since the event begin in 2008, the group has raised over $775,000 for GED students at the Alamo Colleges.  In 2014, they created a nearly $110,000 endowment to provide scholarships through the Alamo Colleges Foundation for GED students progressing to college.  Plans are already underway for the 15th Annual GED Brunch—a quinceañera celebration—on Saturday, December 3, 2022.  Save the date!

For questions, please contact Martha Tijerina at 210-872-8621or marthatijerinam@gmail.com or Richard Farias, director of annual giving at the Alamo Colleges Foundation, at 210-313-8238 or rfarias14@alamo.edu.