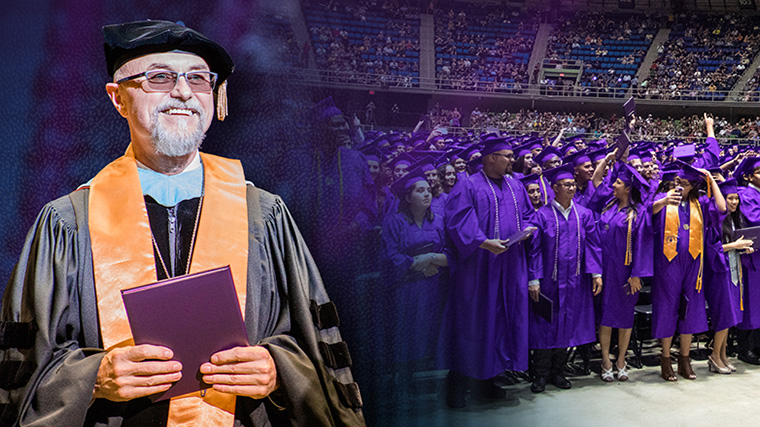 “I have loved Northwest Vista College more than any other institution for which I have worked, and I have loved being your president more than any other job I have ever held,” wrote Baser in his letter to NVC students, faculty and staff. He has been leading the institution for eight years. “Being a part of this extraordinary and award-winning college and Alamo Colleges District is a rare privilege.”

As a first-generation college student who paid for college while working in construction, Baser believes in expanding the door of opportunity for all students, particularly those underserved and under-resourced. During his tenure, NVC’s enrollment increased from 15,797 in 2014 to 18,542 in 2020, according to data from the Texas Higher Coordinating Board. NVC graduation numbers grew by more than 90% from 1,617 awarded associate’s degrees in 2014 to 3,079 in 2020.

The college is listed among the top community colleges in the nation for Hispanic enrollment and degree attainment by Hispanic Outlook on Education 2021. NVC’s Hispanic enrollment increased from 57% in 2014 to 64% in 2020, according to the Texas Higher Coordinating Board. The college added 42 full-time faculty, a 36% increase since 2014. During Baser’s leadership, NVC’s grant-funded support for faculty and student research and other initiatives grew from less than half a million to more than $50 million in 2021.

This month, Northwest Vista College received a congratulatory letter from Dr. Belle Wheelan, president of the Southern Association of Colleges and Schools Commission on Colleges, regarding NVC’s Fifth-Year Interim Report, which was found to be in compliance with the select standards of the Principles of Accreditation.

“We are in the best position ever to attract top talent in higher education in the nation,” said Baser, regarding the forthcoming national search for the next president of Northwest Vista College. “I have learned much at Vista and we have accomplished most of what we hoped to accomplish, and I will leave the college in superbly competent hands to continue its mission to provide opportunities for success.”

During Baser’s tenure, NVC expanded student programs and resources. Through business partnerships, the college team established the Microsoft Datacenter Academy, Amazon Web Services Academy and two field schools for anthropology and environmental sustainability. In 2020, NVC became the first college within the Alamo Colleges District to establish a local chapter of SALUTE Veterans Honor Society. Prior to that, the college created the NVC Veterans' Lounge and Resource Center.

To accommodate its growing student population, NVC is currently in the process of constructing an expanded Cypress Cultural Center. Other projects include a new Cedar Elm STEM Center, a recently completed Desert Willow Welcome Center, and a second multi-level parking garage.

Baser’s leadership also promoted a positive workplace, leading to Northwest Vista College’s three-year recognition as one of the “Most Promising Places to Work in Community Colleges” by the National Institute for Staff and Organizational Development and “Diverse: Issues in Higher Education” in 2018, 2020 and 2021.

In 2019, the West San Antonio Chamber of Commerce recognized Baser with an Educator of the Year Legacy Award. A year prior, he was featured in “Diverse: Issues in Higher Education” for prioritizing diversity and increasing retention and graduation.

Baser has built an amazing team of professionals who will continue the performance excellence and student-centered service. As he transitions, The Alamo Colleges District will begin a nationwide search with plans to have a new president in place for the Fall 2022 semester.

Baser intends to remain in San Antonio with Kari, his wife of almost 40 years, and their granddaughter, Kennedy. He plans to stay an active supporter of Northwest Vista College and the Alamo Colleges.

Northwest Vista College - Alamo Colleges District opened in 1995 with 12 students and is now one of the largest college institutions in San Antonio. Students pursue associate degrees and certificates, as well as transfer to four-year institutions. Located in Westover Hills, Northwest Vista College’s expanding agreements with business and higher education partnerships provide a wealth of opportunities for students and the community.