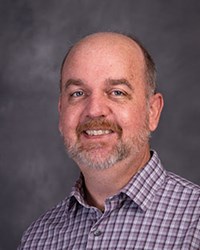 I’m Allen Miller, a math instructor here at NLC.  I grew up in Albuquerque, NM, and wanted to study music in college.  After researching universities near me with music schools, I chose Texas Tech University in Lubbock (Goin’ Band from Raiderland, Band 1 Trumpet Rank).  I was a music theory and composition major for a semester before changing to electrical engineering.  Once in engineering classes, I was far more interested in the “why” and “how” behind the engineering—the mathematics.  I changed to applied mathematics as my major, and after graduation, I stayed at Tech for graduate school.  It was as a graduate student, teaching for the first time, that I learned how challenging and rewarding teaching can be. I earned a master of science degree in mathematics in 2000.

With a master’s degree, I applied for a teaching position at South Plains College in Levelland, just west of Lubbock.  I was there for eight years before moving to San Antonio.  I worked at NEISD for one year as a math teacher, then at Texas State University in San Marcos for one year as a lecturer.  I was an adjunct instructor here at NLC, then earned a full-time position in 2010.

I live in the Schertz-Cibolo area with my wife and two of our three teenage children—the oldest moved to Bloomington, IN to study at Indiana University.  We have plenty of dogs and cats to keep the Roomba very busy.