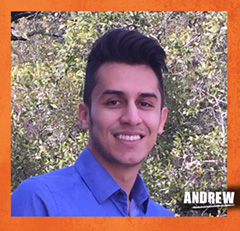 Obtaining a college education can seem like a long and expensive journey to many high school students. The path, however, can be expedited for those who enroll in the Dual Credit program at Northwest Vista College. Such was the case for Andrew Rico, who completed 19 college-level credit hours at his high school.

“The dual credit courses gave me a head start in my college education and instilled in me a sense of confidence that helped in my transition from high school to college,” said Andrew. “I felt prepared and comfortable with college.”

That sense of confidence continued to propel Andrew as he doubled up his college load after enrolling at Northwest Vista College.

He completed his associate's degree in less than a year, even thought it often takes many students double that amount of time to complete a degree.

Since graduating in 2010, Andrew went on to Loyola Marymount University where he received a Bachelor of Arts in Film and Television Production. He is currently enrolled in a master’s program in Media Studies at the University of Texas at Austin and is working on “Fantastic Fest,” which is the largest film festival in the U.S., specializing in horror, fantasy, sci-fi and action films.

“I believe that the dual credit courses which shortened the time I spent completing my associate's and bachelor’s degrees had an impact on why I went straight into my master’s program and kept the momentum going.”