“I owe NVC my life because I got so much more than just an education; I got a fresh start on life.” 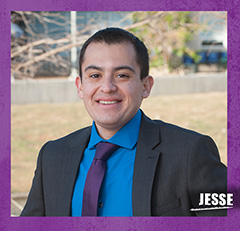 As a single father, Jesse Salazar found his passion and career choice by attending Northwest Vista College. He received an associate degree in New Media Communications as well as a Marketable Skills Award in Digital Video and Web Design.

Jesse was one of only a few community college students accepted into the University of Texas College of Communication’s Radio-Television-Film school. Not many students are accepted into the program straight out of high school, and even fewer are selected when transferring from two-year colleges.

While doing freelance work and internships to build his resume, Jesse, along with the help of his mother, always makes time for his son, Jesse Jr.

“I want to make sure that I am doing work I am proud of and work that makes my son proud of me.”

Jesse’s successful path started when he enrolled at NVC. He was active in many organizations and encouraged other students to get involved.

"Without the foundation from NVC, I don’t know where I would be,” he added. “I wasn’t even interested in film when I first started at NVC, but the professors and instructors here were really great. Because of them I fell in love with the program and my journey took off.”