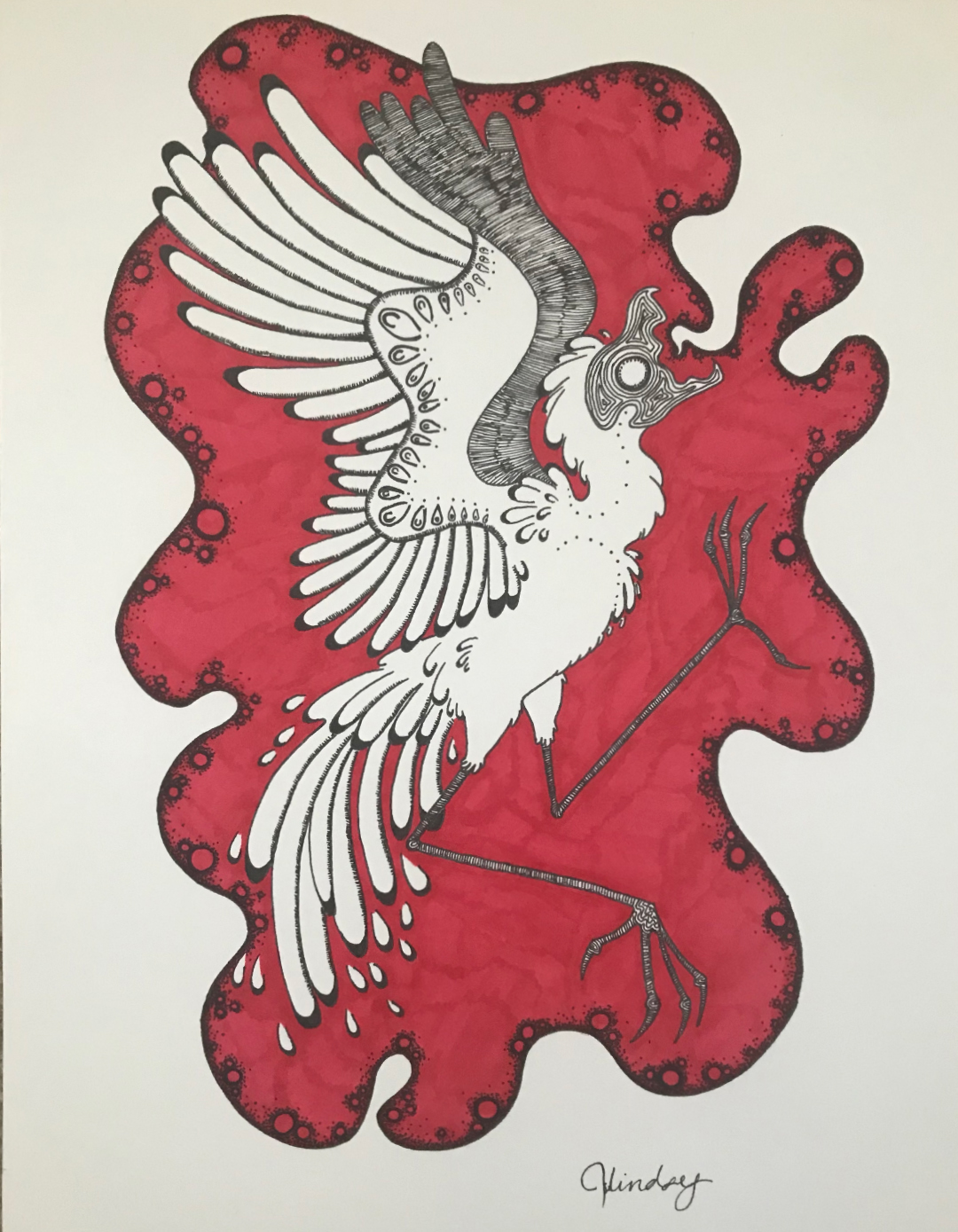 Why did you choose NVC and what do you like about it?
NVC was a great choice for me because they were close to home and offered many opportunities. Attending allowed me to participate in dual credit classes while still in high school, which was a nice perk. NVC makes everything easy in terms of finding my classes, or handling more tedious tasks like transferring to a first time college student. Additionally, the campus itself is very beautiful; it's well kept and clean. I also appreciate the teachers I've had so far, and I am thankful to the staff that work hard everyday to give the students a good experience at NVC.

Describe your background. What made you decide to be an artist?
I first started drawing because of my older sister. Ever since we were little, my sister would teach me and my brother how to draw. We would make characters of all kinds, and usually my sister would draw them for us. I really liked drawing when I was younger, and most of what I drew were attempts to draw things my sister drew, as I really looked up to her and her art. When I was around 11 or 12 years old, I became frustrated that what I drew on paper never looked the same as in my head, so I stopped drawing. I never took any art classes because I didn't think I should since my sister was the artist in the family, and I loved her art and simply admired her. From there, I would only doodle every now and then and maybe try to draw something occasionally.

Finally, I decided I wanted to draw again when I was around 15 years old. Slowly but surely, I started to gain some momentum and motivation to draw consistently, which took a few months. Eventually, I started to love drawing again, and it was satisfying to be able to draw the ideas in my head on paper. It has only been a year and a half since I started making art more seriously, but as I steadily improve, I feel more encouraged to keep going! I would mainly like to be an artist so I could take part in creating great stories. My dream would be to be a part of a team where we make awesome 2-D animated (or any animation type) films that help both kids and adults be inspired in their lives, whatever it may be. Right now, I simply want to improve my skills so I can create small stories with unique characters that others who see them will enjoy.

Which classes or faculty members impacted your work and your life?
My Art Appreciation class impacted my life in a small, but good way. My professor, Desiree Schanding, had entering the art exhibition as extra credit. I am very glad that she showed this to us, or else I would have missed this opportunity. Also, it was encouraging to see her nice comments on the art assignments I had worked very hard on, so that inspired me to continue with the same work ethic.

Describe your work’s concept, aesthetic, and your process of making it.
For each work I had submitted, I wanted them to all share a theme. I decided that I wanted each one to only use only one color while everything else was black and white. I attempted for them to achieve a mysterious aesthetic, one that urged any who sees it to create their own meaning from it. At the same time, I also wanted each one to stand on its own and be visually appealing independent of any "deep" meaning or "hidden message". For all of my submissions, I didn't name them until after they were done, much like how you base a title off of the contents of a book. 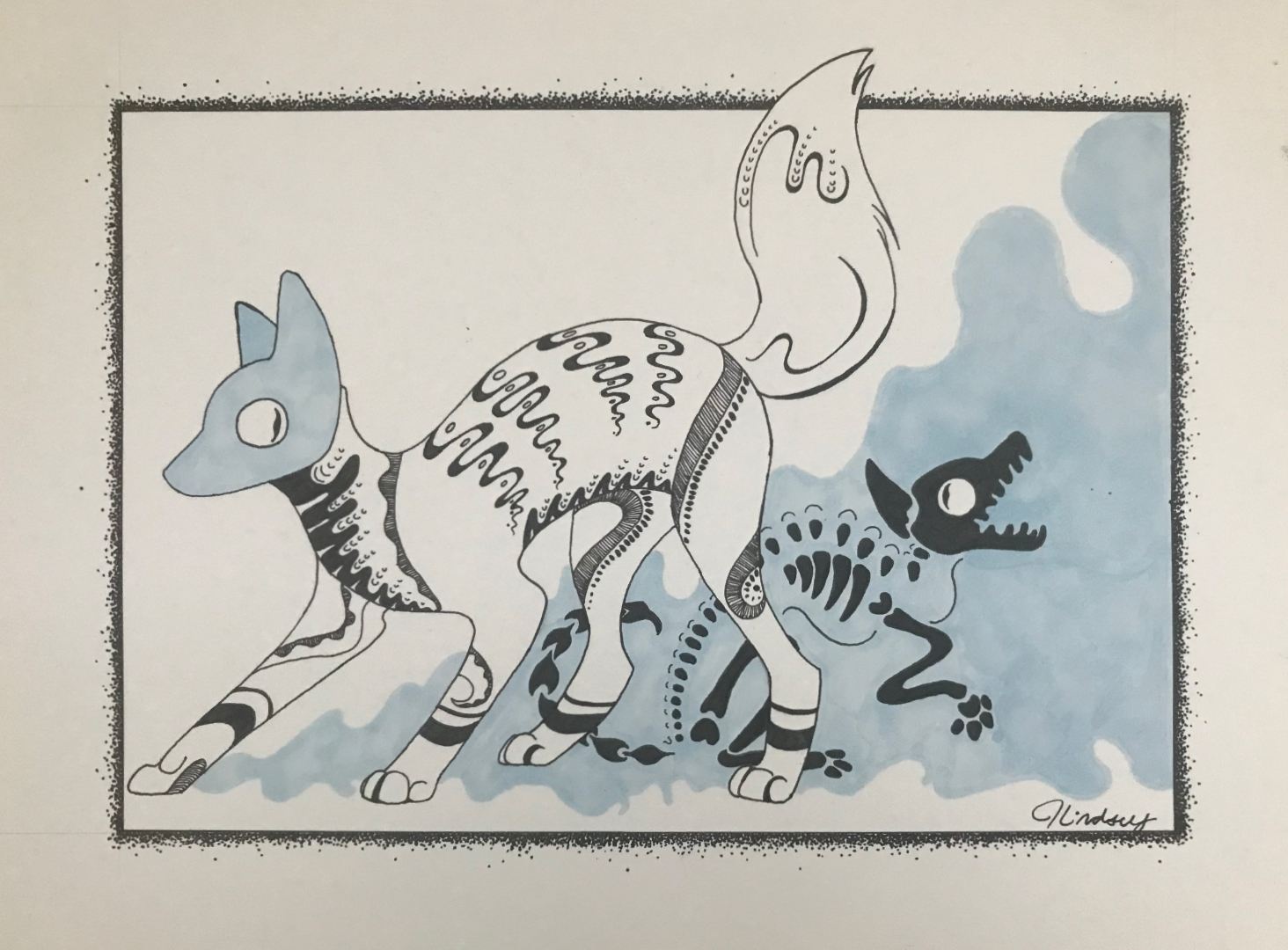 When making "I Know You", I simply wanted to make a fox-like creature with designs. While creating it, I wanted to add something else because it felt very empty. So, I added the "fox skeleton". It wasn't until made this addition that I came up with the name of the art I had created. Basically, the blue of the fox's face corresponded with the blue of the smoke; in the sense that what was in the smoke was the conscience. I thought that the skeleton represented something bad that had been done that no one else knows about but you. The way that the fox is looking at the evil in its conscience, is the same way we know when we do something wrong, and it haunts us until it's made right.

When I made "Heart Speaks", I knew that I wanted to draw a bird and have designs all around as well. Ideas just came to me on the fly while drawing, so I just went with it. I realized that having the organic shape around the bird as the frame would be cool. The designs were done randomly, I just enjoyed the process of adding elements until it looked good. I named it "Heart Speaks" because out of the mouth speaks the heart, and what you say relates to who you are as a person. That is another reason why what's coming out of the bird's mouth is surrounding it. 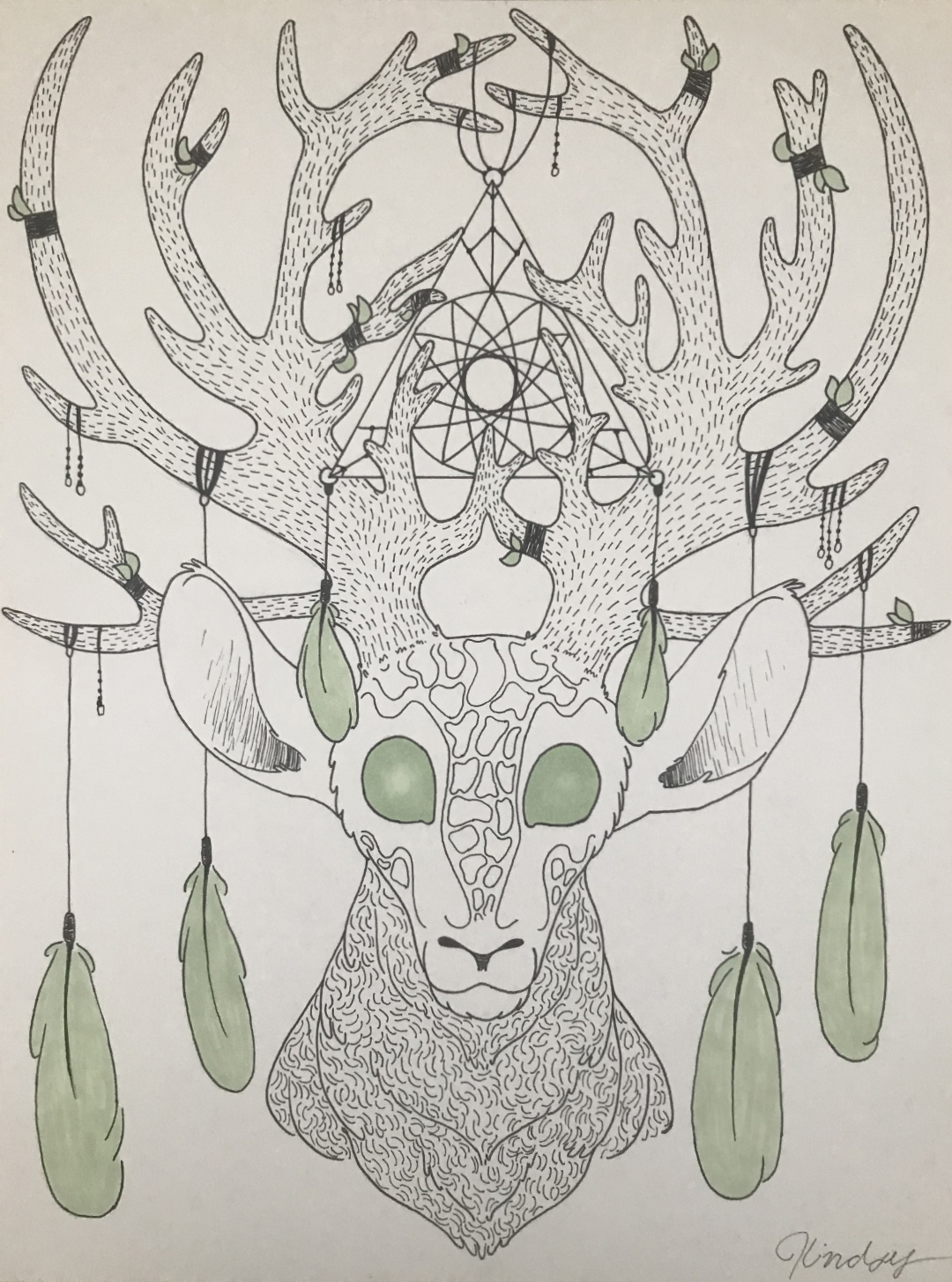 Lastly, "Dreamcatcher" was made simply because I love dreamcatchers. They are very beautiful and I thought a dreamcatcher held in place by the antlers of a deer would be pretty neat. I didn't have any meaning behind this artwork, I just wanted to create something pretty and visually appealing.
With all three of my submissions, I wanted to focus on enjoying the process of creating them. I wasn't too focused on whether they were selected for the exhibition or not, but I am happy that my work was accepted. I wanted to make something that I liked, something that I wouldn't be ashamed to show anyone, and I am glad that others have selected my art to be a part of the Art Exhibition.

Which artists inspire and/or influence you the most and why?
My sister inspires me the most. She is a very talented artist, and seeing the path she has gone through as an artist is a journey I look up to. She's had many ups and downs, and her art is very unique. The times when we have gone to artist shows for her college, her art always stands out and is different from the others. I love how she always has something meaningful in her pieces, and she incorporates many symbolic elements that aren't so farfetched. Obviously, she influences me because she is my sister and I have always loved her art and creativity.

The only other artists that I know are some that are on YouTube and Instagram. There are very many, but what I like about them is the way they create their pieces. Especially those that create stories within one picture and have charming characters that are distinct and recognizable.

What kind of plans do you have set for your future as an artist? Are you planning to pursue a Bachelor's degree?
I do plan to pursue a Bachelor's degree in art. Though I don't know the future or how it might change, I do have some desires and dreams I would like to see become reality if I do become an artist. As I said earlier, I want to create stories. Specifically, I would love to create characters and be a part of a team that makes amazing 2-D animated films. I would like to create stories where the films are beautiful and exciting for both kids and adults. At the same time, I would want to incorporate lessons and deep meanings for adults that watch it too. I would want the films to be different, though, something refreshing and new. As someone who loves movies, I get bored when I see the same plots in several different movies and stories (at least for the ones I have seen). Basically, I would want to be a part of something different, of course where art and story-telling are involved. However, though I have a slight idea of what I want to do, I am still open to whatever life brings! I don't know what might change, but I'm excited to embark on this art/life journey I am currently on.