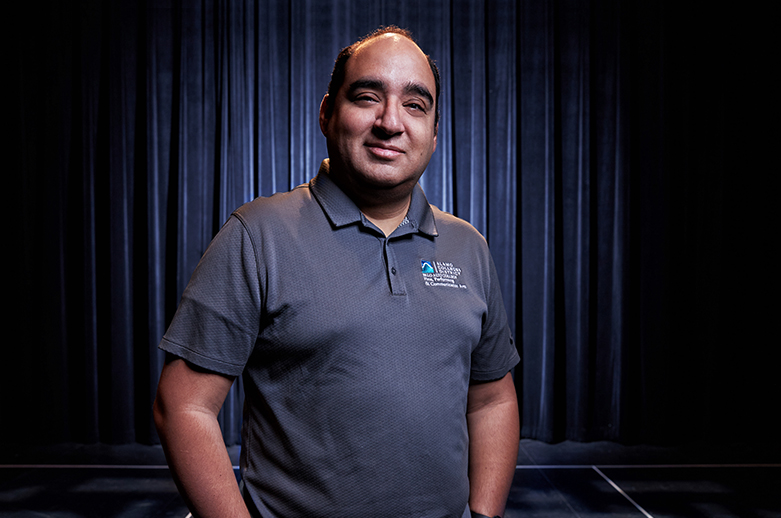 Since the creation of Teatro Palo Alto, its artistic directors have endeavored to produce performances that the community can connect with and enjoy.

As Teatro Palo Alto ramps up for its 2022-2023 season, Nicolás Castañon, artistic director and assistant professor at Palo Alto College, has been busy planning, casting, writing, and everything in between to make sure all is perfect before the curtain goes up.

“Teatro Palo Alto is for our community, by our community,” said Castañon. “When we select shows, we look at our values. We want to select works from underrepresented people, works by women, people of color, and works that tell the stories of the Hispanic community.”

One of this season’s shows, in particular, will be something all in the community can relate to – food, family, and culture. Camilla La Magica makes Tamales is a children’s book written by Chef Cariño and Paloma Cortez that tells the story of Camilla and her pup Osito.

Castañon, who at the time was putting together the production schedule for the upcoming season, describes how he stumbled upon the book while shopping online one day.

“I was on Amazon one day doing my online shopping. I typed in San Antonio children’s authors, and Camilla La Magica popped up,” said Castañon. “It’s written by two ladies who have roots here in San Antonio, and their family owns Mi Tierra restaurant. Chef Cariño Cortez, one of the authors, is the executive chef at that restaurant, and this book is an homage to their grandmother and enjoying food with their family.”

Castañon immediately fell in love with the story and reached out to the authors for permission to adapt the book into a play. This will be the first time the story is performed on stage.

As a playwright for the production, he worked on the scripting for each character.

“It’s all about finding the characters, their story, and finding out what they want. If you know those things, it’s about charting a path to get to those things,” Castañon said. “Looking at Camilla, we got such a strong, cute little character who loves magic. For her, it’s a journey to finding her magic, and she finds it through food.”

Currently, the Teatro team is in the rehearsal process. But in addition to rehearsals, a lot of work goes on behind the scenes to make a show performance ready.

“We’re usually looking at a four to six-week rehearsal period. Then we go into two weeks of performances,” said Castañon. “This particular production is going into three weeks because we are doing our (elementary) school shows with it. So, within those six weeks, not only are we doing rehearsals with the actors learning their lines, but we are also building sets and making costumes.”

In Camilla La Magica Makes Tamales, audiences can expect a recognizable scene of a family gathered together to enjoy making a traditional recipe and the generations of love passed down in each bite.

“There’s a reason we like stories like Encanto, for example. It’s the characters that we (the Hispanic community) associate with,” said Castañon. “In our Hispanic culture, we love our grandma. She will make sure that we don’t go home hungry. She takes care of you, and she can be the mother figure for some. I recognize the people in this story. I see my mom, my dad, my dog, and I see my grandma in this.”

Teatro Palo Alto is the producing arm of the Palo Alto College drama program and produces four shows per season, with two shows happening during the fall semester and two in the spring.

As the biggest producer of theater shows out of the five Alamo Colleges, Castañon, alongside other PAC drama department staff, has founded Friends of Teatro Palo Alto to support the advancement of the arts at PAC. Proceeds from this organization benefit student scholarships, and conferences, provide unique learning opportunities, and assist in underwriting productions.

To learn more about past, present, and future Teatro Palo Alto shows, visit alamo.edu/pac/teatro. To get involved with Friends of Teatro Palo Alto, please reach out to Nicolás Castañon at ncastanon3@alamo.edu.