When a recent U.S. News and World Report ranking listed interpreters as one of the best jobs in 2021, it wasn’t news to Dr. Tom Cox.

Cox, the chair of Languages at SAC department, has spent the last 20 years training American Sign Language interpreters at the college. Prior to that, he was an interpreter himself.

“It doesn’t surprise me in the least that this is a high wage, high demand position,” Cox said. “It surprises other people because it’s not on their radar.”

That is changing as the demand for interpreters grows. Many graduates from SAC’s two-year ASL and interpreter program go directly into part-time or full-time employment, typically starting out at $25 per hour and increasing with experience and additional credentials.

“They are immediately employable in multiple places,” Cox said. 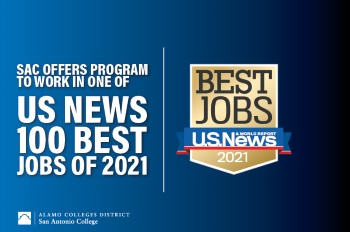 SAC offers the city’s only ASL interpreter training program. Established in 1994, it’s the only program in Texas that requires students to pass the state’s certification test as a graduation requirement.

“It holds our program to a higher standard,” Cox said.

The program also recently began offering a program for deaf support specialists, an emerging field that provides advocacy, mentoring and support for those in the Deaf community.

Many students enroll in ASL courses to fulfill a language requirement, then change their majors when they fall in love with the program and realize that interpreting is a viable, well-paying career, Cox said.

Employment opportunities are found in a variety of settings, from elementary, secondary and college level education to freelance work for agencies that provide interpreter services.

“An interpreter might do a doctor’s appointment at 9 a.m., then do a meeting at a school district, then later in the afternoon do a safety meeting for postal employees,” Cox said. “You’re always doing something new and different and you’re in control of your schedule.”

One driving force in the demand for interpreters is the growth of video relay technology, which allows people with hearing disabilities to communicate over the phone using a high-speed internet connection, special video equipment and an interpreter. With video relay, a deaf person can schedule a doctor’s appointment, order a pizza or talk to their mom via an interpreter.

SAC graduate Frank Peralez III has built a successful career as an independent contractor and an interpreter for a video relay company. Enrolling in SAC’s ASL and interpreter training program at SAC “was the best decision of my life.”

“I eat, breathe and live interpreting,” he said.

Since graduating from SAC nearly 10 years ago, he has earned additional state and national certifications in ASL interpreting and served as president of the Texas Society of Interpreters for the Deaf. Being an interpreter has allowed him to be his own boss, make his own schedule and even travel internationally.

Interpreters provide a critical service to clients in both good and bad moments, Peralez said. He has interpreted for clients in situations ranging from births and job offers to funeral arrangements and custody battles.

“This job is not easy. It’s a huge amount of responsibility,” he said. “But at the same time, it’s so rewarding.”