SAC Goes to the Ballgame

Some 500 members of the SAC family donned their favorite Missions and SAC gear and headed to the ballpark for a fun-filled celebration at the popular Thursday Dollar night game. Staff members, students, and alumni were provided free vouchers to attend the game, with the first 100 receiving a free upgraded seat. The outing was sponsored by the Office of the President, the Office of Alumni Relations, and the Staff Senate.

In addition to the game, fans were treated to a special appearance by SAC's spirit figure, the Gnome Ranger. And, SAC was also featured before the game when future SAC Ranger, Edward Andrew Contreras, threw the first pitch alongside SAC President Dr. Robert Vela. 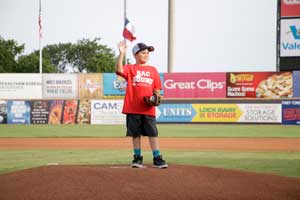 The crowd roared with excitement when Edward’s first pitch reached all the way to home plate. Going into the fourth grade, Edward is currently enrolled in one of the SAC Summer Camps and earned the honor of throwing the ceremonial first pitch.

According to the MySA.com article, the Missions of San Antonio Baseball Team renamed themselves the Flying Chanclas this summer to celebrate the Alamo City’s Hispanic community. SAC’s night at the Flying Chanclas took place during one of the nine home games designated for this series of events. The MySA.com article further explained that the team’s inspiration behind the name came from "the matriarch of the Latino family, the Abuelita.”

SAC has hosted a night at the Missions games for the past three summers, and is happy to connect with the community whenever possible. #GoChanclasGo