The conference brought community college students to the University of Texas at Austin from June 9-11 to introduce them to the university experience and inspire them to continue their education after earning their associate degree.

Students stayed in dorms on campus, ate meals in a campus dining hall and attended a variety of workshops, from a time management session to a Q&A panel with alumni. They also had a chance to explore the campus and city with conference leaders. 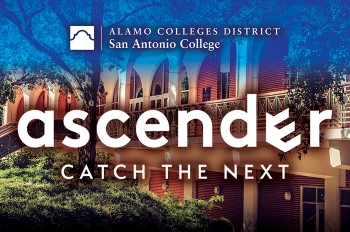 Students in the Ascender program at SAC were invited to participate. Ascender is designed to offer support and connection to first-generation college students, especially Latinx populations.

The conference is designed to show community college students that transferring is not only possible for them, but something they must consider, whether it’s to a local university or a four-year institution elsewhere in Texas or beyond, said Gerard Robles, Ascender Program Coordinator at SAC.

“The idea is to put them on a university campus and have at least one weekend of sort of living like a student,” Robledo said. “The conference gives them an experience they’ve never been exposed to or even considered.”

Michele Tinoco, a freshman at SAC in the radio, television and broadcasting program, had already set her sights on UT Austin after SAC. But as a non-traditional student who never had the experience of living on campus, the conference gave her a feel for the campus culture and a sense of possibility.

“Not a lot of non-traditional students have that opportunity or even the time to research what we need to do to get to the next level,” Tinoco said. “I was excited to be there, to see the campus and the pride they have as students and faculty there.”

Catch the Next is a national organization that focuses on improving college readiness and completion among Latinx and other underserved communities. One of its signature programs is Ascender, which offers support to help Latinx and first-generation college students achieve their academic goals.

Ascender is available on college campuses across the country, including SAC. The program offers a variety of resources including one-on-one advising and counseling, special training for instructors to help first-generation students reach their academic goals, and a close-knit community of students with similar backgrounds. The program creates an academic “famillia” that offers support and a sense of belonging.

Ascender students are more likely to graduate with associate degrees and to successfully complete bachelor’s degrees than their peers statewide.

“Throughout their time at SAC, Ascender students have our support,” Robledo said. “Then we’ll usher them on to the next level.”

For Tinoco, the care and support she’s received at SAC will make it hard to leave, but she’s ready for the next step.

“We all have to have the next goal in mind,” she said.