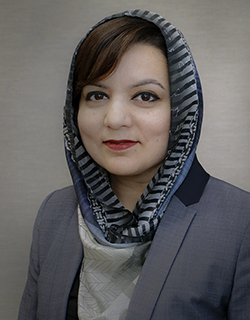 Dr. Sobia Khan, born in England, was raised in Karachi, Pakistan and came to the United States at the age of 18.

Coming to the U.S. as an international student, Dr. Khan has personal experience being a student at a community college. She describes her educational journey as non-traditional, and explains how she feels deeply committed to the mission of community colleges.

Before she became a “Dr.”, Dr. Khan attended Colin College and earned an associate degree in Graphic Design. She continued her studies at Richland College, part of the Dallas County Community College District, while she awaited her citizen status. “I found my home in the community college world,” she explained. “I experienced how important it is to have a place to belong. A space to thrive.”

Like many college students, Dr. Khan juggled life’s responsibilities while also taking college courses. While she admits that her journey to earn a bachelor’s degree took “very very long,” she was ultimately successful and earned her degree in under 10 years. And she didn’t stop there. Shortly after earning her bachelor’s degree, she was accepted and received a full scholarship to the University of Texas at Dallas to pursue a six-year program to earn a Master’s and Ph.D.. Dr. Khan holds a B.A. and M.A. in creative writing and literary studies and a Ph.D. in studies in literature.

Before coming to San Antonio College, Dr. Khan was previously an associate dean of world languages, cultures, and communication at Richland College, one of her alma maters. She held multiple other positions at the institution, including professor of English, director of the Asian-American Native-American Pacific-Islander Grant Project, coordinator of the English Dual Credit program, and vice president of the Faculty Association.

For several years, Dr. Khan has worked with Achieving the Dream and has learned first-hand that success stories require cross-campus coordination.

Her goal is to help students imagine a future they may not have ever imagined before—a feeling she has personally experienced.

Relocating to San Antonio, Dr. Khan is happy to be starting a new journey at SAC. In addition to her work, which is extremely important to her, Dr. Khan also enjoys writing. In the past, she participated in San Antonio’s Book festival and was featured in the San Antonio Current in 2015. View article.