Krystal Paul, may not have made it into outer space while interning at NASA but she did make it pretty high up. During her first internship with the space agency this year, Krystal flew in SOFIA, the Stratospheric Observatory for Infrared Astronomy. SOFIA is a Boeing 747SP aircraft modified to carry a 2.7 meter (106-inch) reflecting telescope. 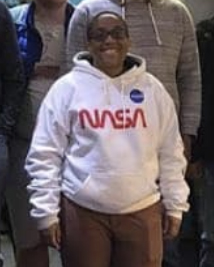 Flying into the stratosphere at 38,000-45,000 feet, SOFIA goes above 99 percent of Earth’s infrared-blocking atmosphere, allowing astronomers to study the solar system and beyond in ways not possible with ground-based telescopes. Krystal was one of the first NASA interns allowed to participate in a SOFIA mission, which lasts for 10 hours and takes place overnight in order to observe the infrared universe.

Krystal’s high-flying internship began in the spring, when she went to the NASA Ames Research Center in Mountain View, Calif. She was one of three interns embedded with the Scientific Instrument Development team working to create an app to spread the science of SOFIA. “Hopefully it will be able to eventually go into museums as a standalone item sharing info just like Hubble or the James Webb Space Telescope already have,” Krystal explained.

After a brief break in May, she returned to start her summer internship at the Ames Research Center just as NASA was beginning to celebrate the 50th anniversary of the Apollo 11 moon landing. Krystal said being at NASA during the anniversary was “amazing!”

She attended NASA’s Solar System Exploration Research Virtual Institute (SSERVI) conference that focused on lunar research. At SSERVI, she learned of new innovations   from NASA’s Artemis program as well as plans to return to the moon from space programs in Japan and Russia.

Krystal also visited the USS Hornet on the anniversary of when the former aircraft carrier recovered the Apollo11 capsule. “My co-interns and I were able to meet astronaut Harrison Schmitt – one of four remaining Apollo astronauts to walk on the moon. He was also the geological consultant for the Apollo 11 astronauts,” said Krystal.

Krystal has returned to SAC to finish her degree in computer engineering and plans to transfer to a university in fall 2020.