San Antonio College students taking Introduction into Engineering participated in a class project that had a playful goal. They created fun and educational toys for a competition hosted by the DoSeum, San Antonio’s museum for kids.

The guidelines for the contest are pretty stringent. Toys had to be created from recycled or re-used materials. They also had to demonstrate engineering or physics principals related to topics such as aerodynamics, force, magnetism, motion or friction.

Students would get about three weeks to come up with a concept and make a working product. They would then bring their toys to be judged during Showcase Day at the DoSeum.

The contest featured two award categories. The first award would come from the DoSeum staff, who judged the toys on their STEM properties. The other was a People’s Choice Award voted on by children visiting the DoSeum on the day of the competition.

Miguel Sandoval was part of a team that developed a space-themed toy which resembled a pinball game. Called Voyager, the toy had a foam core surface and with four sides that let a player tilt the game back and forth and from side to side. A player would have to navigate a ping pong ball, standing in for a space ship, past planets and black holes in order to return back to earth. 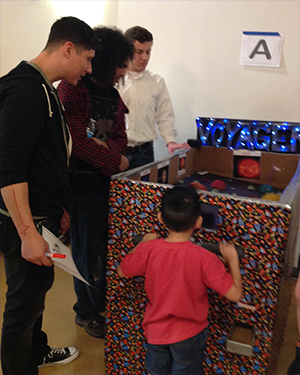 said he was delighted to see children playing the game. “I enjoyed making kids laugh and seeing them having a good time,” he said. He was also glad that the toy withstood all the torture the children put it through.

Sandoval’s team won second place from the DoSeum staff and tied for The People Choice award.

Jeremy Laster, was a member of a team that created the Acorn Shoot, a tube with a  spring action on the back that could launch acorns at targets. Using magnets, the tube could be attached to a triangle-shaped frame that could send acorns into the air at 60, 45, 30, and 15-degree angles.

Laster, a former marine who served in Afghanistan, said he is passionate about the –concept of projectile motion. “It’s very relatable. Everyone has experiences relatable to projectile motion, whether it’s kicking a soccer ball, launching a bike off a ramp, playing baseball or throwing a note to your friend. It’s applicable in so many ways,” he said.

His team created two Acorn Shoots and collected an enormous amount of acorns to be used as ammunition. The toy turned out to be so popular that acorns scattered across the floor had to be collected to be re-used by DoSeum visitors.

The Acorn Shoot won the first-place award from the DoSeum judges and tied for the People’s Choice Award.

“It was one of the coolest, most inspirational things I have done in the realm of engineering,” said Laster about the project. “You get to see where your ideas go.”