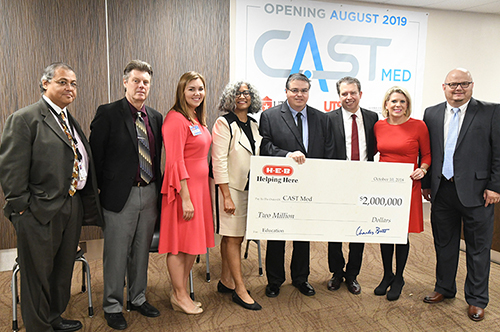 According to a SAISD press release, CAST Med will be operated as an in-district charter, and will be open to students across Bexar County through a lottery. Only 150 spots will be available for the first class which begins in August 2019.

The application period for the first cohort of ninth graders will begin in November 2018.

“We are thrilled to continue partnering with CAST and SAISD,” said Dr. Robert Vela, president of San Antonio College. “SAC has been involved with CAST Tech since shortly after its inception, and will have a smooth transition as we expand educational deliverables to CAST Med. Students will benefit from state-of-the-art facilities housed in the Nursing Allied Health Complex and the entire college campus.”

The Centers for Applied Science and Technology (CAST) is a network of tuition-free, industry-led, career-themed high schools in San Antonio founded by Charles Butt and H-E-B in partnership with area industries.

CAST Med will be the second of the CAST schools to partner with SAC. CAST Tech, which opened in Fall 2017, is a career-themed high school focusing on coding, cyber security, gaming, entrepreneurship and business. CAST Tech is located downtown at the old Fox Tech High School. The CAST Med campus will be located on the city’s Southside at 2601 Louis Bauer Drive in the Brooks mixed-use development.

SAISD, CAST Schools, and partners accept a check for $2M from HEB for the development of the future CAST Med High School. Photo courtesy of SAISD.