As the sheriff of Bexar County, Javier Salazar is in charge of a large organization with a massive mission. He is the leader of more than 1,800 employees—1,500 of them deputies—who manage the jail, take care of security at the courthouse, patrol the county, and investigate crimes.

Not too shabby for a lawman who began his career as a police officer patrolling the streets overnight while attending San Antonio College by day. 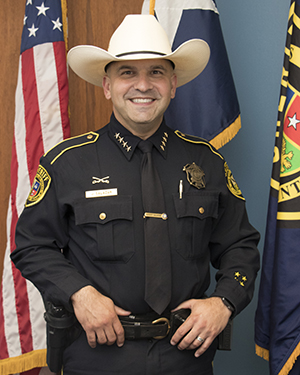 Salazar first came to SAC to pursue a radio/television/film major. “I really wanted to go into broadcasting. I grew up in a broadcasting family,” he said, adding that his father was a long-time local disc jockey. However, after a heart to heart talk with his father about the business, he was persuaded to go into law enforcement.

Salazar joined the San Antonio Police Department (SAPD) and attended the department’s academy. After becoming an officer, he restarted his education at SAC as a criminal justice major. “I was working the graveyard shift and, during the day, going to SAC and taking classes. I would get off at work at 6 a.m., sleep in my truck, and then go to class at 8 a.m.”

He added that he applied many of the lessons learned in the classroom into his work at night. He graduated with an associate degree and later received a bachelor’s from Wayland Baptist University.

During his 23-year career in the SAPD, Salazar moved up the ranks, working as a bike patrol officer and later transferring into community policing. He was promoted to detective in 1998 and worked as an undercover officer in narcotics. He served as an administrative sergeant for the police chief and handled executive protection duties for the chief, the city manager, the mayor, and visiting dignitaries. He also worked as an internal affairs investigator.

In 2012, he became a familiar face to San Antonians as an official spokesman for the police department. “I went back to what I considered my roots working in TV again,” he said.

In 2016, he successfully ran for Bexar County Sheriff and has made dramatic changes. He established a Special Victims Unit (SVU) to handle adult sexual assault cases. He created a Public Integrity Unit, which investigates criminal charges against officers and public officials. He started a Citizen’s Academy to give the public an inside look at how the Sheriff’s office operates. And he brought back the Sheriff’s mounted unit, which employs retired race horses.

Salazar looks back at his own time as a student at SAC. He believes SAC has much to offer students who are thinking of going into law enforcement or any other program “I remember those years fondly,” he said. “I didn’t get a whole lot of sleep, but it was a good time in my life.”