Sometimes an ordinary event can be the start of a life long journey. For María Berriozábal, her career in public service, including becoming the first Latina member of the San Antonio City Council, began in a Salvation Army dining room. At the time, Berriozábal was working full-time as secretary for the organization while attending San Antonio College at night.

It was January of 1961 and the young Berriozábal was watching President John F. Kennedy’s inaugural address. “I heard that speech alone in the dining room and it was like he was speaking to me,” Berriozábal recalled. “I felt I was part of the new generation being called to serve my country.” 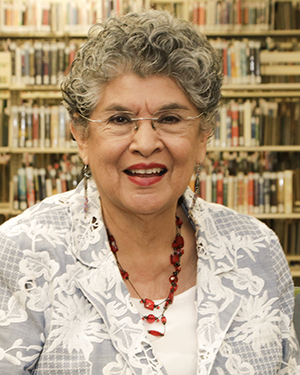 Over the next decade, Berriozábal stayed busy working full-time in the public arena while attending SAC at night. She was the legal secretary to the general council of HemisFair ’68, a world’s fair which took place in San Antonio.  “I learned politics from the inside,” she said about the job.

Later, she was recruited by Bexar County Judge Blair Reeves as an executive secretary. At the time the county judge was the in charge of all administrative duties, including budgets for the courts and the jail. The two worked together to get federal grants for projects such as workforce development and criminal justice planning.

Berriozábal left the courthouse after she married. She eventually transferred to the University of Texas at San Antonio where she received a bachelor’s in political science 20 years to the day after she graduated from high school.

In 1981, Berriozábal ran and won a seat on San Antonio’s City Council becoming the first Latina to serve on the council. She held the position for 10 years. In 1991, she ran for mayor of San Antonio. Her race attracted national attention, however she lost by only three points in a tight runoff election.

After the mayor’s race, she was offered a teaching fellowship at the John F. Kennedy School at Harvard. Her life had come full circle. Thirty years after she heard Kennedy’s call to action, she was now at an institute named in his honor and inspiring a new generation of public servants.

Since then, Berriozábal has continued to put her own energy into public service at all levels. She represented the United States at several conferences at the United Nations including the 4th World Conference on Women. Most recently, she was appointed to serve on the Mayor’s Housing Policy Task Force.

She offered advice for SAC students. “Truly listen to what individuals are saying. From what they say, you can understand where they come from,” she said, adding, “we have the power to inspire. The power to encourage.”