San Antonio College students had the rare opportunity to join business leaders on a trip to Washington to talk about issues important to the city. Called SA to DC, the annual meeting is organized by the San Antonio Chamber of Commerce and gives local leaders a chance to meet with national lawmakers

In the 41 years the Chamber of Commerce has traveled to Washington, this was the first time college students were invited to attend.

Invitation to Washington
The offer came during a meeting between one of the Chamber’s executive board, Justin Holley, with SAC academic program coordinator Geraldo Guerra, who is also an advisor for the San Antonio College Men Empowerment Network (SACMEN).

Holley and Guerra met at a SACMEN event in November. During the conversation, Guerra said it was one of his goals to take students to Washington. Holley told Guerra about the SA to DC meeting that would take place in early February and extended an invitation to join the trip.

Guerra accepted and, with a very tight schedule, began working to organize a SAC delegation which would include six members of SACMEN. In January, all the details fell into place, including money for the trip from the Student Activity Fund.

SAC in Washington
The SAC delegation arrived in Washington on a Monday afternoon and were joined by 130 San Antonio business leaders at an evening reception. The next two days were filled with meetings from early in the morning until late in the evening.

In the afternoon, San Antonio business leaders would break into several different issue groups and make visits across the nation’s capital. The groups included: 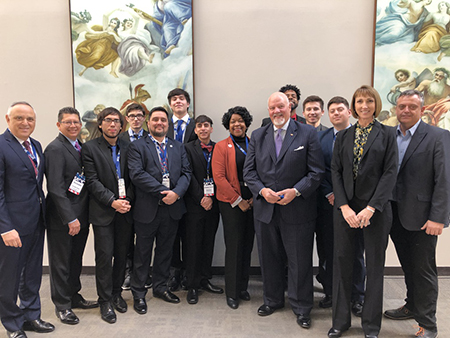 Each student, as well as Guerra, were embedded into a group. Gregory Lamar Torres, a nursing major assigned to Healthcare/Bioscience team, said he was able to see the relationship between national policies and San Antonio health care systems.  “I was really intrigued by how much of an impact we were able to have in such a short time while we were in DC,” he said.

Spencer Watson, a liberal arts major, was part of the Small Business team, which included a member of the University of Texas at San Antonio Board of Trustees and the president of the West San Antonio Chamber of Commerce.

“It was great to team up with them and see how they do business and conduct themselves,” said Watson, adding “they were very professional and courteous. They all reached out to me, made sure I knew what was happening.”

Once meetings were finished, the SAC students spent a day sightseeing around Washington before returning to San Antonio.

Future visits with the Chamber
Guerra said the trip was a success and there is already talk about taking students next year. “This was great not only for SAC but also for the city,” he said. To that end, Guerra has been invited to join the Chamber’s Committee on Workforce and Development to plan for 2020.