Elaine Kearney, the managing principal of TBG Partners, a local landscape architecture firm, had an untraditional start at San Antonio College. Before coming to SAC, Kearney had already earned a bachelor’s degree at San Antonio’s prominent four-year school, Trinity University. Armed with a degree in economics, but wishing for a profession that offered more creativity, Kearney was motivated to explore a career in the field of design. 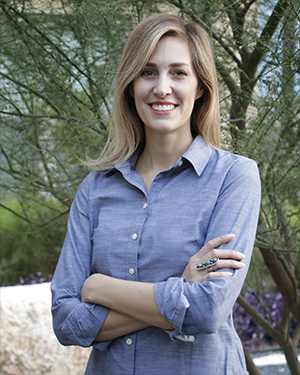 Though fortunate to have graduated from Trinity debt-free with help from scholarships, financial aid, and her parent’s support, she now had to pay for her own classes. Like many students, Kearney chose to attend SAC because of the affordable tuition and flexible classes. She was working part-time, going to school part-time, and learning to juggle life’s responsibilities for the first time on her own.

Kearney recalls being happily surprised by the course offerings at SAC. The architecture department’s classes in drawing, drafting, and architectural history appealed to Kearney’s creative side. She was impressed by the professors, and possibly even more so, by her fellow students. Most of her classmates had full time jobs and families to support, which made her realize that if they could juggle those responsibilities and succeed, so could she.

For two semesters, Kearney focused on learning everything she could from her professors and sought out to build an impactful portfolio. When one of her professors at SAC mentioned landscape architecture during class, she was intrigued by the notion of a profession which combined place-making, design, and an understanding of natural systems.

Towards the end of her time at SAC, Kearney visited Harvard University in Cambridge, MA. Upon returning home, she applied for and was granted admission to Harvard’s Graduate School of Design. In 2004, she earned a master’s degree in landscape architecture.

Since then, Kearney has worked at recognized firms in Cambridge, Mass. and Portland, Oregon. Currently, she leads the San Antonio studio of TBG Partners, an Austin based firm which is committed to reshaping raw spaces into livable places. In addition, she has also taught as an adjunct instructor at Boston Architecture Center, Portland State University, and Trinity University.

These days, Kearney returns to the SAC campus in a different capacity than when she first stepped foot on campus. Her current firm completed the landscape architecture at SAC’s newest building, the Victory Center, which serves veterans and active duty military. The courtyard garden is a dedicated space for veterans to connect with nature in a peaceful space. With all of her projects, Kearney aims to create beautiful spaces that serve the client’s needs, but also have a bigger purpose.