The old saying “life is what happens when you are busy making other plans” certainly applies to San Antonio College alum Ramiro Salazar. When it came time for him to go to college, his goal was to become a social worker. Instead SAC set a path that would eventually lead him to a career where he is now the director of the San Antonio Public Library (SAPL).

Salazar grew up in Del Rio. After high school, he enrolled at SAC with five friends. On campus, he took a work study job in the periodical section of the library, a position he enjoyed. 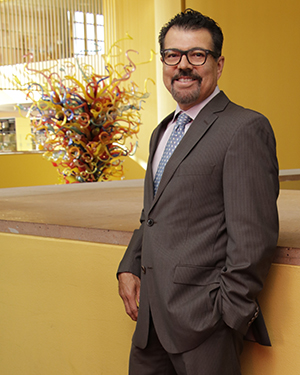 From SAC, he transferred to Texas A&I in Kingsville to pursue a degree in social work, and once again worked at the college library. Later, he accepted a full-time job at the Kingsville Public Library.

When he received his bachelor’s degree, Salazar came to a crossroads. “The plan was to join some of my friends at the University of Michigan,” said Salazar, adding the university had a stellar reputation for its social work program. Instead, he accepted a fellowship to Texas Women’s University to pursue a master’s in library science.

Upon completing his master’s degree, Salazar accepted a job as the director of the Eagle Pass Public Library. From there he came back to San Antonio, where he was head of the Main Library, the Hertzberg Circus Collection and Museum, and director of technical services.

In his new role, he worked ceaselessly with officials, the SAPL board, and stakeholders to raise the profile of the library and to pursue its mission to create a community of readers and an informed public. When he returned, the library was not seen as an integral part in building a better community for San Antonio. Today, that perception is changing.

Under Salazar, the SAPL has invested $91 million to add ten new libraries and renovate 13 existing branches. The Central Library downtown has also received substantial improvements including expanding its Texana collection and its genealogy program.

The library’s digital collection is now flourishing. It recently broke usage records with more than five million checkouts from the online collection. In addition, the library enhanced its free public wi-fi service and recently created a Latino Collection and Resource Center at the Central Library which includes 13,000 items for scholarship and research as well as a space for lectures, workshops, study rooms, and community events.

Salazar credits SAC for helping with his education. “For someone coming from a small town, I know that the decision to go to SAC, known for it’s more personal approach and quality educators, was extremely valuable,” he said.