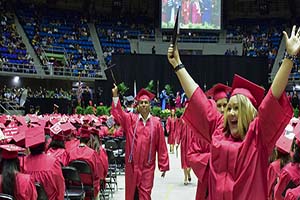 On a dreary, rainy and unseasonably cold Saturday morning, the mood in the Freeman Coliseum was anything but damp. At the strike of 9 a.m., the doors to the famed venue were opened and hordes of people began filling the stands to celebrate the Class of 2019 crossing the stage.

In total, approximately 1,039* graduates crossed the stage to earn an associate’s degree or certificate. In addition, there were about 50 students who earned a GED and nearly 100 high school students from Travis Early College High School.

As in years past, the Freeman Coliseum was overflowing with proud families and friends. Officials estimate that the Coliseum was at capacity with some 10,000 spectators in attendance.

This year’s Outstanding Former Student was David Zammiello, President and CEO of Project Quest. Zammiello’s speech included highlights of his journey to San Antonio College and ultimately onwards to the University of Texas at San Antonio (UTSA.) He spoke about his somewhat indirect path to becoming a college graduate, but ultimately he persevered and became a successful senior-level executive at USAA. After retiring from USAA in December 2016, Zammiello embarked on a new journey leading Project Quest, San Antonio’s leading workforce initiative.

Pictures from the Commencement Ceremony can be found on the SAC Facebok page. As well, the ceremony was recorded and will be showcased on InTV (Time Warner Channel 98, Grande Channel 21, and AT&T Uverse Channel 99) later this month.

*This story was updated on Monday, May 20, to reflect the updated number of students who walked the stage from 1,020 originally reported to 1,039.