Last February, Karen Navejas was at home taking a quiz when she first noticed she wasn’t feeling well. She told her husband her chest hurt but finished her work while he gave her a massage. Afterwards, she took a shower and went to bed. A few hours later the pain became much worse. “I started crying and I said ‘something is not right’” she remembers. Karen rushed to the ER where doctors found she had a heart attack.

A 35-year-old mother of a blended family with 10 children, Karen had spent the last two years going to school full-time at San Antonio College in pursuit of an associate degree in nutrition while also working full-time in food service at a local elementary school. She had pushed herself both at work and at school to graduate and, with just three months until finishing, she was in the hospital with doctors telling her it was time to slow down. 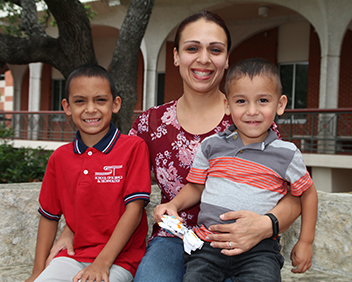 She did, but not completely. While she was not allowed to go back to work for three weeks, Karen only missed one class before going back to SAC. Now her determination and grit paid off. She graduated with honors at SAC’s spring commencement and in the fall, will pursue a bachelor’s at the University of Incarnate Word.

She credits her children and husband for helping her achieve her goal. Her oldest, a 17-year-old son, will be graduating from high school and will attend the University of North Texas in the fall. Her youngest, three-year-old Jose, was the reason she attended SAC after leaving high school 16 years ago.

Jose has oral dysphagia and needs special attention. At one point she was taking him to seven appointments a week related to his health. “My husband had to quit his job because we had to take care of him full time,” said Karen.

Karen decided to go back to school to stabilize the family’s finances. Karen learned about SAC’s nutrition program online and registered in the spring to begin classes in the summer of 2017.

During the school year, she would arrive at work by 5:30 a.m. and leave at 2 p.m. She would go to SAC in the afternoon and then home for studying usually getting to bed by 11 p.m. before starting all over again.

Along the way, she received several scholarships including the LULAC Parent/Child Scholarship, which will also pay tuition for her five-year-old daughter once she is ready for college.

The day before graduation, Karen said she was full of emotion. “I find myself trying not to cry right now,” she said.  “I knew it was going to be hard but It can get done. You need dedication, devotion, structure, and support,” she said. “You can go a long way.”