Professor of Mathematics Said Fariabi, chair of the department of mathematics, architecture, physics and engineering (MAPE), received the Equity and Excellence Award from San Antonio College during the Service Awards ceremony held at the beginning of the spring semester. 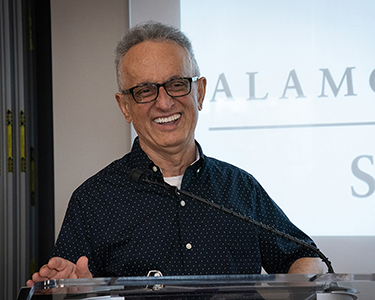 Fariabi is the first person to receive the new award.

“This award is part of our journey into equity at SAC and represents the beginning of a tradition,” said Mona Aldana-Ramirez, Director of Student Success for Equity, Diversity and Inclusive Excellence. She added that a major priority for SAC is to place equity at the forefront and recognize faculty and staff who advance equity for student success.

“Having Dr. Fariabi as the first recipient of this award validates the years of work he and the math department have done to create opportunities for students to succeed,” said Aldana-Ramirez.

One of the biggest innovations Fariabi implemented was to create an additional algebra course for non-STEM majors. The new class almost doubled the passing rate of students taking math. The success of the class paved the way for the math department to offer other course offerings for students who were not pursuing a STEM major and help them to graduate.

In addition, Fariabi said he is very passionate about he does. “My office door is always open for the students and I am here every day at 7:30a.m. The students know they can walk in to get help,” he said.

Whether it's problems with registration, scheduling, or an issue in the class, Fariabi works hard to help resolve student concerns.

“Whatever I can do to help them to be successful, I will not hesitate to do,” he said.

Fariabi, who was born and raised in Iran, came to the United States in 1974 to pursue graduate studies in mathematics. He received a master’s in 1976 and a doctorate in 1979 from Oklahoma State University in Stillwater. He returned to Iran until he accepted a position as a full-time lecturer at the University of Texas at San Antonio in 1990.