A year after tournaments were cancelled due to COVID-19, the San Antonio College speech team dived into competitions this academic year – but in a very different format.

“From the very onset of the pandemic, the speech community was at the forefront of adapting to our new world,” said Justin Blacklock, coordinator for speech workshops and director of the forensics program art San Antonio College. He added that soon several national tournaments popped up online and speech teams across the country moved to virtual competitions by the fall. 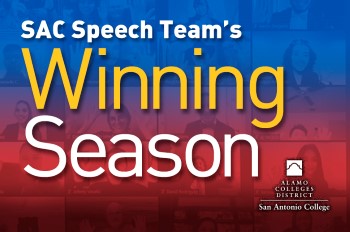 The switch from competing in person to competing by computer took some getting used to with the SAC team trying out the new digital format at four tournaments last fall. Fortunately, two returning team members, Alejandro Canales and Aaron Delgado quickly adapted.

During the Spring semester, the team competed successfully in five tournaments and set a record at well.

In February, the team participated in the Texas Intercollegiate Forensics Spring Tournament, where Delgado was named to the TIFA All State Squad and Blacklock was  recognized with the Educator of the Year Award.

In addition, Aaron Delgado set a record for the most first-place finishes by any one individual in the history of the organization. He won first place in six categories as well as first place for Top Speaker.

At the Speech on the Beach Invitational Tournament, hosted by Del Mar College in Corpus Christi, the SAC Speech Team finished in first place Sweepstakes for day two of the competition and third place overall Sweepstakes for the weekend. Karissa Gonzales, in only her second competition, who won first place in Informative Speaking.

The next month, the team participated at the American Forensics Association Nationals competing against 75 colleges and universities. Among the schools at the tournament included Yale, Cornell, Seton Hall, and George Mason. The SAC team won third place in the Community College Sweepstakes in the nation.

The team concluded the season at the Phi Rho Pi national tournament, which included 50 colleges from across the nation, and won the Bronze in Individual Events Sweepstakes with Canales and Delgado both winning two awards apiece.

If he had to describe the speech team’s performance with just one word, Blacklock said that word would be resilience. “That’s what these students show every day and I couldn’t be prouder,” he said.

With the season finished, Blacklock says the team will be back in the summer preparing for the next year of competition.