SAC Recognized Among Top LGBTQ-Friendly Colleges in the Nation

San Antonio College has been named one of the Top 8 Community Colleges Leading the Way for LGBTQ Inclusion for 2021 by Campus Pride, a national organization fostering safer, more inclusive communities for LGBTQ people and their allies at colleges and universities. 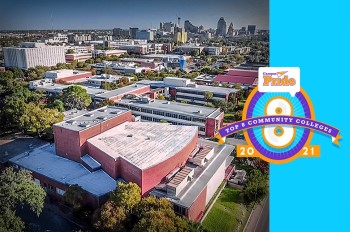 “The honor comes the same year that SAC was first recognized in the Campus Pride Index,” said Jacob-Aidan Martinez, director of the Office of Student Life. He added that SAC received a 4.5 star out of a possible 5-star rating with the original recognition and given Premiere status for being an LGBTQ friendly institution. The high ranking led to SAC being named as one of the Top 8 Community Colleges in the nation.

Martinez said SAC received the honors for several accomplishments and commitments. These included establishing a resource page on the website for LGBTQ students as well as promoting Gay Pride Month during June. Although the pandemic limited the number of events that could be held on campus during the summer, SAC still hosted a drive-by Gay Pride kickoff for the month, participated in a virtual Pride parade, and lit the Moody Learning Center in rainbow colors at night to show its support of the LGBTQ community.

In addition, a committee led by Martinez and composed of faculty, staff, and students, was formed to discuss LGBTQ issues on campus. A group from this committee organized and hosted LGBTQIA2S History Month that took place from mid-October through mid-November.

The committee is also working on future projects including expanding SAC’s faculty/staff mentoring program to include LGBTQ members who can sponsor LGBTQ students.

And in the spring, SAC will host a lavender ceremony to recognize graduating LGBTQ students. During the event, students will receive rainbow themed stoles to wear during graduation to celebrate their identity while they receive their diploma.