Update: SAC student Allen Brown has been awarded the Jack Kent Cooke Scholarship. He graduated with honors in May.

SAC student Allen Brown, who graduates in May, is a finalist for one of the nation’s most competitive scholarships for community college students transferring to four-year universities. 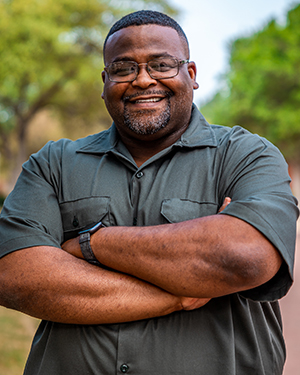 While he will find out in May if he wins the Jack Kent Cooke Foundation’s Undergraduate Transfer Scholarship, being a finalist is a triumph in itself - especially considering that Brown spent 12 years battling substance abuse and homelessness before enrolling at SAC.

In August, Brown will celebrate 5 years of sobriety. After successfully overcoming addiction, he plans to help others do the same. Brown is completing an associate of applied science degree in human services – addiction studies, with a goal of becoming a licensed chemical dependency counselor.

In addition to his studies, he works full-time at a local treatment center as a case manager and is completing an internship as a licensed chemical dependency counselor. He’s been accepted into UTSA, where he plans to earn a bachelor's degree in psychology on his way to a master's degree in clinical mental health.

After graduating from high school in San Antonio in 1995, he became a chef, working at Walt Disney World in Florida and heading a catering company in Seattle. During those years he developed a substance abuse problem that got progressively worse.

“I ended up being homeless for almost 12 years in four different states,” he said.

He returned to Texas to reunite with his family, but as his substance abuse continued, he returned to life on the streets. When he decided he was ready for help, he turned to Haven for Hope, a facility in downtown San Antonio offering multiple services for people experiencing homelessness.

While there, he underwent counseling with a licensed chemical dependency counselor, along with trauma counseling. At the end of his program, one of his therapists encouraged him to consider becoming a counselor himself.

He then transitioned to Oxford House, a non-profit that operates addiction recovery homes in the community. He began taking classes to become a peer recovery coach and with a scholarship from Haven for Hope, he enrolled at SAC in the fall of 2019.

The Jack Kent Cooke Undergraduate Scholarship will help him with his next steps. Each Cooke scholar has access to generous financial support to complete their bachelor’s degree in any area of study, along with ongoing advising and planning support.

As he continues his education, he is especially interested in working with the LBGTQIA+ and African-American communities, which are underrepresented in the counseling community.

“I want to be able to pull those areas together. It’s part of me,” he said. “Sixty-three percent of people that are in prison right now for drug charges are African-American. Very few get a chance to work with someone like us when you’re in there. This is where I’m hoping to bridge the gap.”