When SAC Drama Professor Charles Falcon chose a play for a student theater production three years ago, he didn’t realize what a fitting commentary it would be on real-world events in 2022. 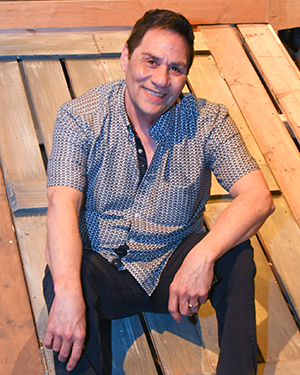 “Anatomy of Gray,” which was performed in McAllister Auditorium in April, told the story of a mysterious healer who arrives in a small town that becomes struck by a contagious and deadly illness. Though set in the 1880s, it mirrored the struggles of the past two years, exploring themes including loss, love and connection.Though he chose “Anatomy of Gray” in 2019, it was postponed due to COVID-19. It would turn to be the perfect play to help audiences process the pandemic.

The play is Falcon’s final act before retirement after 38 years of teaching theater and speech at SAC.

He jokes that he began to consider retirement after running into former students who would tell him they had retired, and hearing students say “My grandmother took your class!”

In seriousness, as he nears age 70, Falcon views retiring as bittersweet.

“I know there will be tears, but it’s a good thing too,” he said. “I love my classes, I love my students, but it’s time.” 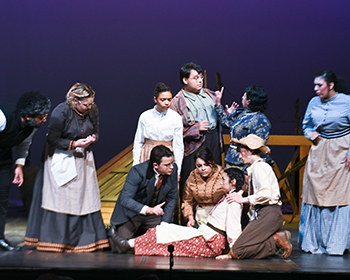 While he’s ready to move on, he leaves behind a career that has allowed him to add his own creative spin on productions, such as setting Shakespeare’s Macbeth in Mexico, calling it “El Macbeth.” He enjoyed weaving the superstitions of Mexican culture into those of the original play and staging an elaborate production that included actors shooting arrows across the stage (“You couldn’t do that now,” he adds).

Falcon began his career with a bachelor’s degree from Oberlin College in Ohio and a master of arts degree from Eastern Michigan University. After graduating, he spent a year in Los Angeles, where he took classes and auditioned. He decided to return home to San Antonio, where he eventually started his own restaurant and catering business. At the same time, he began teaching theater at SAC as an adjunct professor.

When he was offered the chance to teach full time, he left the restaurant world behind to pursue his theater dreams. Over his career, he’s earned numerous accolades, from Community College Educator of the Year in 2005 to the Robert E. Ziegler Inspirational Professor Award in 2015.

This spring, he plans to retire to the Texas Hill Country while staying involved with theater, especially continuing his work as a judge for state University Interscholastic League (UIL) competitions of high school theater students. He is among the top UIL theater judges in Texas, selected as one of a handful of judges at the state level over multiple years.

After devoting decades of his life to theater, he believes the art form is more important than ever.

“We need theater, not to create jobs, but to create well-rounded people that know who they are and are compassionate because they understand who others are.”