The SAC speech team has been on fire this spring, winning several awards at tournaments across the state. What makes this different from past years is that the team’s success is due to its one and only member, Lebone Mohloane, an international student from Johannesburg, South Africa.

Over the course of four tournaments, she has won more than a dozen awards, competing against as many as 16 colleges and universities at a time. 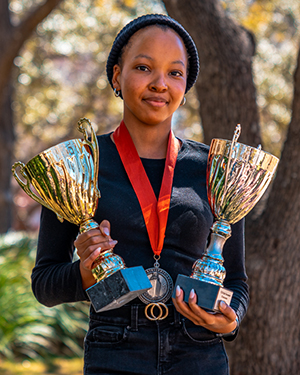 This comes just after participating in her first college tournament late last fall.

Justin Blacklock, coordinator for speech workshops and director of the forensics program, quickly recognized Lebone’s talent while she was giving a presentation in his class.

“She was super conversational and engaging. I could tell that she had a message to share and that the message was probably a different perspective than most of the students in my class,” said Blacklock.

Blacklock invited her to be part of the speech team and she accepted.

“I joined because I love to talk a lot,” she joked, adding that she was also looking for an extracurricular activity.

She chose two categories to compete in: Program Oral Interpretation and Poetry. “In poetry, I talk about being an African immigrant in the United States because that resonates with me.”

As the spring speech tournament season approached, Blacklock realized that Lebone would be SAC’s only competitor.

“Life happens. During the pandemic, it was difficult for students to commit to something that’s as time consuming and as involved as speech is. At the beginning of this semester, some students had to take on extra jobs for their families, some of them had to concentrate on their grades,” explained Blacklock, adding, “but Lebone has stayed strong.”

Speech tournaments are organized so schools can compete in two competitions over one weekend. For example, in early February, Lebone participated in the Texas Intercollegiate Forensics Association (TIFA) State Tournament on Saturday and the Texas State University’s Bobcat Forensic Classic on Sunday.

A week later, Lebone competed in the Texas Community College Forensics Association’s (TCCFA) tournament the first day and in the Texas Shuffle Swing, hosted by Tyler Junior College and San Jacinto College-North , the next.

She also received the Top Speaker Award from the TCCFA.

In addition, she won third place in the Top Speaker Award for the weekend.

“It is amazing,” said Blacklock about the tournament successes. “We have always had exceptional students but Lebone shines. She has a natural ability and talent.”

Lebone has two more competitions this spring, the regional tournament followed by the nationals, to held in St. Louis in April.

She plans to compete in the fall, as well.