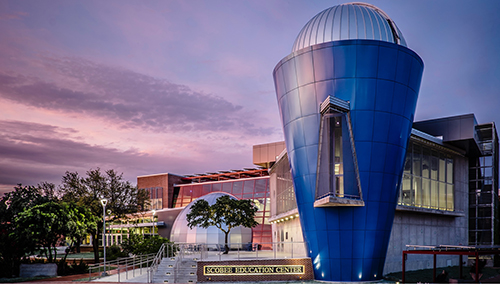 The Scobee Education Center with the silver domed planetarium in the bakground.

On an appropriately beautiful evening, several guests, including members of the College Executive Team, Alamo Colleges trustees and Scobee Education Center donors, joined together to celebrate the stellar occasion – the 60th anniversary of the Scobee Planetarium.

During the event, the guests heard a proclamation from the City of San Antonio congratulating the planetarium on its milestone and watched a presentation on the planetarium’s history.

The highlight was the dedication of a new artwork placed in front of the Scobee Education Center. A large sundial was installed in the Challenger Holt Memorial Garden earlier this year in memory of former planetarium coordinator Bob Kelly.

The planetarium first opened its doors on Oct. 1, 1961. Since then, it has presented thousands of immersive presentations to entertain and enlighten generations of guests. Always using the latest technology, the planetarium introduces visitors to planets, stars, and other celestial bodies, particularly to thousands of school children who visit on field trips. In addition, the planetarium has hosted watch parties for events such as lunar and solar eclipses, which have drawn thousands of people eagerly looking up to the skies.

“Throughout the past 60 years, the Scobee planetarium has been San Antonio’s chariot to the heavens, where generations have shared a common interest in space and come a little closer to reaching for the stars,” said Rick Varner, Director of the Scobee Education Center. “It has been 60 years of scientific, emotional and spiritual experiences that live in the memories of our community.”

The planetarium will open back up to the public Friday, October 29, after being closed due to the pandemic. Events are already in the works to mark the 60th anniversary – and beyond.

The Scobee Planetarium staff is already planning events for when a total lunar eclipse in May 2022, and two solar eclipses, one in Oct. 2023 and another in April 2024, take place in San Antonio. 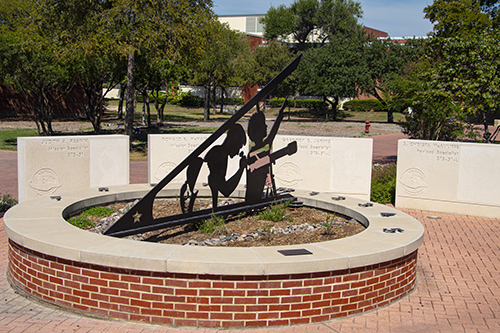