Christopher Saldivar started at San Antonio College in May and has hit the ground running. As Project Director for the Title III BUILD Grant, a new position at SAC, he is working to make connections to help recruit and support underrepresented students into science, technology, engineering, and math (STEM) fields. 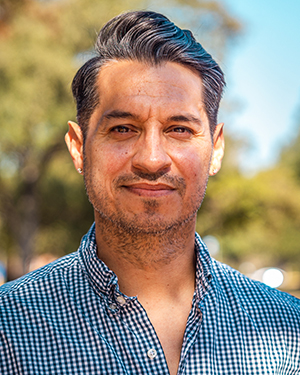 If he feels a sense of urgency to his work, it’s because there is one. Saldivar is overseeing the $5 million, five-year grant from the Department of Education. SAC initially received the funding last September, but because of the pandemic, the college was unable to hire staff to kickstart the program.

“The grant is approaching its second year and there are many adjustments that have to be made,” said Saldivar, adding, “there’s a lot of catching up to do.”

Now Saldivar is fast tracking the work that needs to be done to get back on schedule. Among the top priorities was to set up key collaborations across campus. His first partner was Geraldo Guerra, Director of the Academic Success Centers at SAC.

BUILD will fund embedded tutors who will be assigned to classrooms in high performing courses to improve student retention and graduation rates. As the leader of SAC’s tutoring centers, Guerra will help identify and select tutors for the grant with support from BUILD’s Academic Support Specialist, Dana Ledford.

Another goal of BUILD is to implement a new form of teaching in the classroom. Specifically, the grant funds Course-based Undergraduate Research Experience, known as CUREs which is overseen by Michelle Baland, BUILD’s STEM Programs Internship Coordinator.

“CUREs, is research based. It allows the student to apply what they are already learning in the classroom, it’s very similar to experiential learning. The student is able to see theory while they are learning it and while they can still inquire about it in real time, like through internships that will already be available to them once they step into the classroom,” said Saldivar.

This fall, Dr. Henry Griffith, Engineering Program Coordinator, plans to make engineering the first discipline to incorporate CUREs. Students enrolled in Introduction to Engineering this Fall may have the opportunity to develop and engage in research projects through internships by enrolling in his course.

Saldivar added his goal is to add two disciplines per year by establishing the BUILD Implementation Team (BIT) – a collaboration with STEM department chairs and program coordinators.

The grant will pay a stipend to faculty who incorporate CUREs into their teaching.

For teachers interested in using CUREs, Saldivar is working with Dr. Joan Jaimes and Gerard Robledo in the Teaching and Learning Center to provide professional development training.

While there is still much work to be done, Saldivar said he felt blessed to be working with this grant.

“I went to a community college and I’m the first in my family to go to earn a degree. So when I see a student on campus, it’s almost as if I know exactly what they are going through,” said Saldivar. “It brings me joy to be here.”

A native of Laredo, Saldivar earned a bachelor’s degree in business administration from Texas A&M International University, where he also worked with students participating in the College Assistance Migrant Program (CAMP) and in the High School Equivalency Program (HEP). He later pursued a master’s degree in public affairs and administration at Metropolitan College of New York (MCY).

Saldivar also served as Associate Director of Admissions at MCNY and led City University of New York’s Accelerated Study in Associate Programs initiative at Bronx Community College before returning to South Texas. He also contracts with the U.S. Department of Education to review and score grants for various grant competitions.