Started in 2016, the Student Advocacy Center has officially reopened in a two-story building dedicated to helping students who are facing socio-economic crisis.

Last spring Gregory Lamar Torres, a full-time nursing student at San Antonio College  did not have enough money to cover his phone bill. “I don’t have many resources to fall back on,” he explained. “Working for Uber and Lyft, not having my phone would have prevented me from making any income.”

Fortunately, Torres was able to apply for assistance at the Student Advocacy Center on the SAC Campus. “Having that resource allowed me to get my phone bill paid and kept me afloat until I got steady,” said Torres.

Since it was created using a few rooms on campus, the Student Advocacy Center has helped students who were food or housing insecure or who needed help with social services, including paying an outstanding bill.

In early November, the Student Advocacy hosted a formal grand re-opening to celebrate its move to a larger space and the expansion of services offered to students enrolled at SAC. 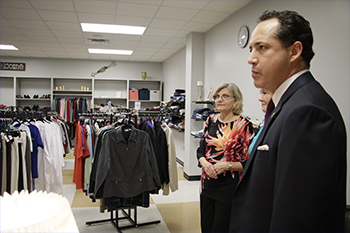 The need is great. A recent study reported that 41 percent of SAC students were food insecure and 44 percent were housing insecure; 11 percent were homeless. The center started by offering an on-campus food bank and a clothing pantry as well as social services provided with the help of graduate students from local universities.“The Student Advocacy Center started in the fall of 2016 in an effort to help students with non-academic needs – the things that were preventing them from being successful,” said Lisa Black, a social work professor who directs the center. “Sometimes it you don’t have food, shelter, or clothing, it’s very hard to focus on school.”

In just two years, the center helped thousands of students and sees nearly 100 students daily. Its services expanded and the center now provides counseling, group therapy, and a grab and go station where students can pick up a drink and a snack for a quick nutrition fix.

“The problems experienced here at San Antonio College are not unique to our community,” said Black. “There is a conversation happening across the country at community colleges and universities about the importance of recognizing the needs of our students, and coming together to provide the support on campus so they can graduate. “