Her dream in life was to go to college. Like so many other young women, Zina Tedford’s aspirations were put on hold when she became a teen mom during her senior year in high school and decided to get married. Although she was accepted to a four-year, private university in Louisiana, Tedford temporarily pressed pause on her educational quest to raise her family. But she didn't let those circumstances stop her. Eventually, she found a way to make her dreams come true and ended up becoming one of the first Latinas in the state to become a city manager. 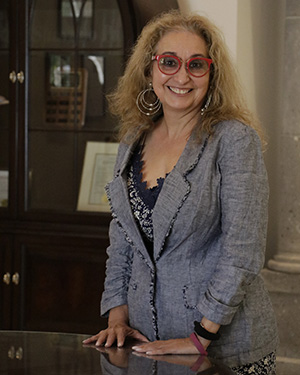 Originally from Mercedes, a small town in the Rio Grande Valley near the U.S.-Mexico border, Tedford is the oldest of five siblings. Her mom, whom she describes as her hero, was the family caretaker while her dad served in the United States Army.

As an Army brat and then an Air Force wife, Tedford moved around a lot and was exposed to many different cities and countries at a young age. After several years of marriage, however, Tedford divorced and became a single mom. At that time, she realized that she would need to go to school in order to advance herself and her family.

Tedford moved to San Antonio in 1985 and chose to attend SAC because the flexible class schedule and low cost of attendance. She worked two jobs, raised her kids, and somehow found time to do homework and go to class.

While at SAC, Tedford took most of her classes in the public administration field, but had an epiphany when she took her first criminal justice course. She was fascinated with the field and ultimately transferred to UTSA and earned a bachelor’s degree in criminal justice in 2000.

From a water billing clerk to the city manager, Tedford served the City of Kirby for more than 25 years. Today, she is retired and on her second stint in public office. She is the City Secretary for the City of Shavano Park, an incorporated city within the San Antonio metropolitan area. A key member of the city’s administration, Tedford reports directly to the city manager and often provides guidance and mentorship.

Recently remarried, Tedford has five children and seven grandbabies and says her most prized accomplishment is her children—all of whom are successful in their own right. Following in their mother’s footsteps, Tedford’s three biological children are all in a public service field. Her oldest, Michelle, is a teacher; her middle child, Joey, is a lawyer; and her baby, Diandra, is a nurse.

Starting college in 1988 and finishing in 2000, Tedford describes that it was a long, and sometimes painfully slow, process to earn her degree. But ultimately, she persisted and made her dream come true becoming a shining example of the saying, “If you can dream it, you can achieve it.”