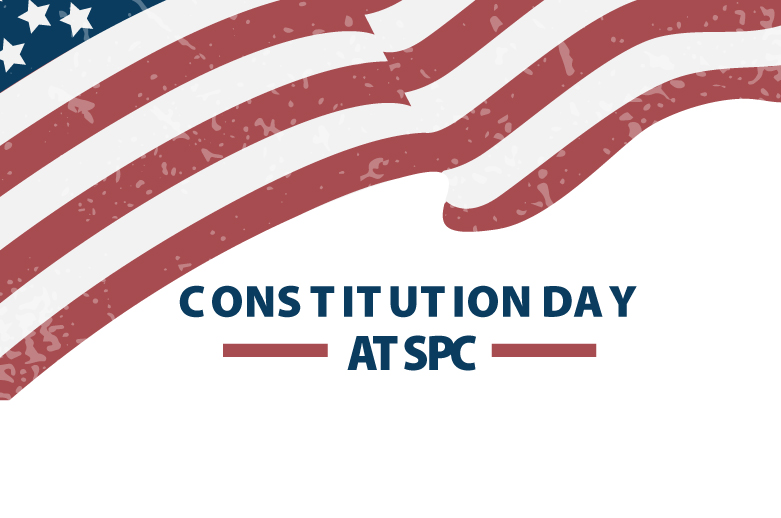 Constitution Day is on September 17

On September 17, 1787, the Founding Fathers signed the most influential document in American history, the United States Constitution. This document was designed to be a framework of our government and establish the rights and freedoms for us, its citizens.

This year, St. Philip’s College is hosting both in-person and online activities at the MLK Campus on Friday, September, 16th, and at the SWC Campus on Monday, September 19th.

Going to be on campus?

Want to Participate online? Join the SPC Arts and Sciences Department for their Constitution Day Discussions!

With the signing of the US Constitution, the United States took a big leap from a confederation of states into one, united country. The Constitution is the foundation of the country, as we fought for our independence and formed a more perfect union with the promise of equal rights for all.

St. Philips College will celebrate Constitution Day with the speaker, Dr. Michael Grillo, Interim Dean for Academic Success of the Department of Arts & Sciences. Dr. Grillo will offer his perspective on the Constitution by speaking on how modern current events and foreign policy challenges are relevant and significant to the importance and protections of the US Constitution.

You are welcome to attend this event as St. Philips College students, staff, and faculty will be able to engage in a discussion that celebrates the adoption of the founding document of our government and its continued relevance to the strength and resilience of our democracy.

Happy Constitution Day! Let’s read the Preamble to the Constitution together as We the People in front of the new inspiring First Amendment tablet overlooking Independence Mall.

On September 16 we not only celebrate Constitution Day but also Citizenship Day, a holiday meant to honor and celebrate the privileges and responsibilities of U.S. citizenship for both native-born and naturalized citizens. In recognition of this special observance, the National Constitution Center hosts an annual Naturalization Ceremony as part of our Constitution Day celebrations, during which 50 immigrants from across the globe will take the Oath of Allegiance to officially become citizens of the United States. The Honorable John R. Padova, senior judge of the U.S. District Court for the Eastern District of Pennsylvania, will preside over the ceremony. All of the new citizens will be given lifetime memberships to the National Constitution Center.

Judge Marjorie Rendell, Judge Cheryl Ann Krause, and Judge Stephanos Bibas of the U.S. Court of Appeals for the Third Circuit join us to discuss how they approached some of the most significant appellate cases on last term’s docket. The judges will also explain how the federal courts of appeal work and their role in the federal courts system.

Historians and legal experts join National Constitution Center President and CEO Jeffrey Rosen for a discussion on the issues and events in early America that led to the Constitutional Convention. We will also explore the major debates at the Convention, and how those discussions shaped the future of the United States. Panelists will also discuss their careers, as well as answer questions from participants.

Join the National Constitution Center for an engaging and informative session with former U.S. Representatives to learn about what it's like to serve in the Legislative Branch. Our speakers will reveal what it's like to run for office and share their experiences from the campaign trail, as well as what a day in the life of a member of Congress looks like. They will also discuss the importance of bipartisanship and working across the aisle.