ON THE BIG NIGHT AT FREEMAN, ST. PHILIP’S COLLEGE COMMENCEMENT CEREMONY FEATURES 675 DEGREES AND/OR CERTIFICATES FOR 468 STUDENTS AT THE 120-YEAR-OLD COLLEGE 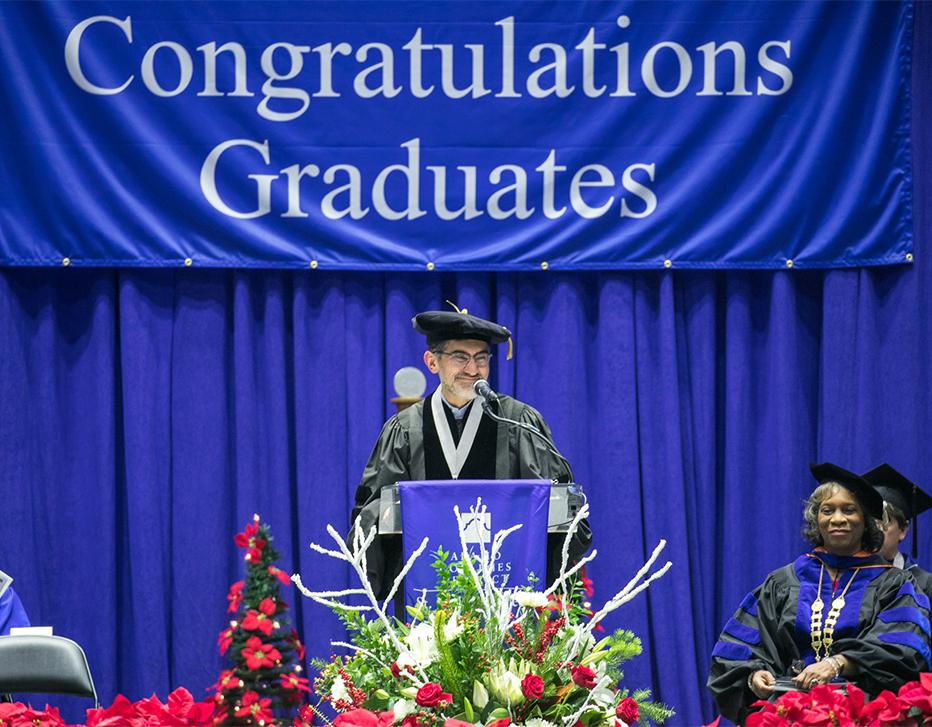 The event was a student-focused convening of 468 students who applied to graduate and receive 675 degrees and/or certificates from St. Philip's College while hearing from outstanding colleague students, faculty and local leaders who have also been on amazing, often intersecting journeys in one of the fastest-growing cities in the nation in 2018:

From collision refinishing technology to electrical trades, and automotive technology to nursing, students in Alamo Colleges District’s first class-with-Baldrige-status wore special cords denoting veteran, alumni, and scholarly status over their graduation robes, and many participated in a judged contest for best custom-made graduation caps as they waited for the ceremonial award of marketable SPC credentials they will use when entering or returning to the bevy of multibillion dollar businesses in San Antonio. Three outstanding students spoke to the occasion for the college’s 140th Commencement ceremony. The first scholar, licensed vocational nursing program student Dorathy Tarpeh was the student speaker for the event. Tarpeh was one of 65 students who are now alumni of one of Texas’ oldest college-level licensed vocational nursing programs---65 joining more than 7,000 alumni of this 69-year-old program. Tarpeh was one of only three 2018 St. Philip’s College Dr. Adena Williams Loston Presidential Scholars. Through giving back and achieving academically, Tarpeh had contributed to helping St. Philip’s College achieve record enrollment numbers and outstanding community engagement while bringing a Governor’s Award for Performance Excellence to San Antonio in 2018, and its share of the Baldrige Award. The family members of her LVN alumna colleague Akoko Keshi Amovin cheered with not just one, but two signs the moment Amovin began moving toward the stage as the college’s only graduating student with the distinctive name Akoko was announced on The Big Night.

“St. Philip's College gave us the ability to thrive...congrats class of 2019. We did it!” Tarpeh emphasized in remarks between smiles and glances toward both colleagues and family in attendance everywhere in the seats of Freeman Coliseum.

Sociology alumnus Alicia Perry was invocation speaker for the ceremony in her capacity as the college’s first HBCU Competitiveness Scholar, and outstanding student veteran alumna Angelia Jacobs was a vibrant benediction speaker who capped off her seasons of providing corporate leadership and corporate team building services in her capacities as the college's Student Government President and as an Alamo Colleges District Alternate Student Trustee alumni member with her moment from the stage on The Big Night at Freeman.

With plans underway, the college’s second Baldrige class graduates in May. To join the conversation on the recent graduation ceremony and the remarkable progress of both students and their college of choice, visit the social media links at the college’s web page www.alamo.edu/spc. For administrative details on the Dec. 14 ceremony, visit the college graduation page at http://alamo.edu/spc/graduation/, email the college record and registration team at spc-gradadv@alamo.edu or contact Tracy Shelton, the college’s associate director of records and registration, at 210-486-2292, tshelton@alamo.edu. (SPC images by Julysa Sosa)

CAPTION: Images of the first graduating class of the first community college system ever to earn the presidential-level Malcolm Baldrige National Quality Award for performance excellence are a reminder that the celebrated class walked the graduation stage during St. Philip's College’s 140th Commencement ceremony on Dec. 14 in Freeman Coliseum at 3201 E. Houston St. (SPC Images by Julysa Sosa)