CURRENTLY ENROLLED IN A TRANSFER PROGRAM WITH UTSA AND SEEKING HIS ELECTRICAL ENGINEERING DEGREE, ST. PHILIP’S COLLEGE ALUMNUS TERRELL THOMPSON WAS IN THE DRIVER’S SEAT WHEN SPC EARNED A HIGH EVALUATION AMONG POSTSECONDARY INSTITUTIONS THAT CONFER THE MOST DEGREES TO STUDENTS OF COLOR

The first automotive technology student to represent the St. Philip’s College brand as Mr. St. Philip’s in the 120-year-old college’s history has passed the leadership responsibility on and is thriving in his quest to become a degreed engineer 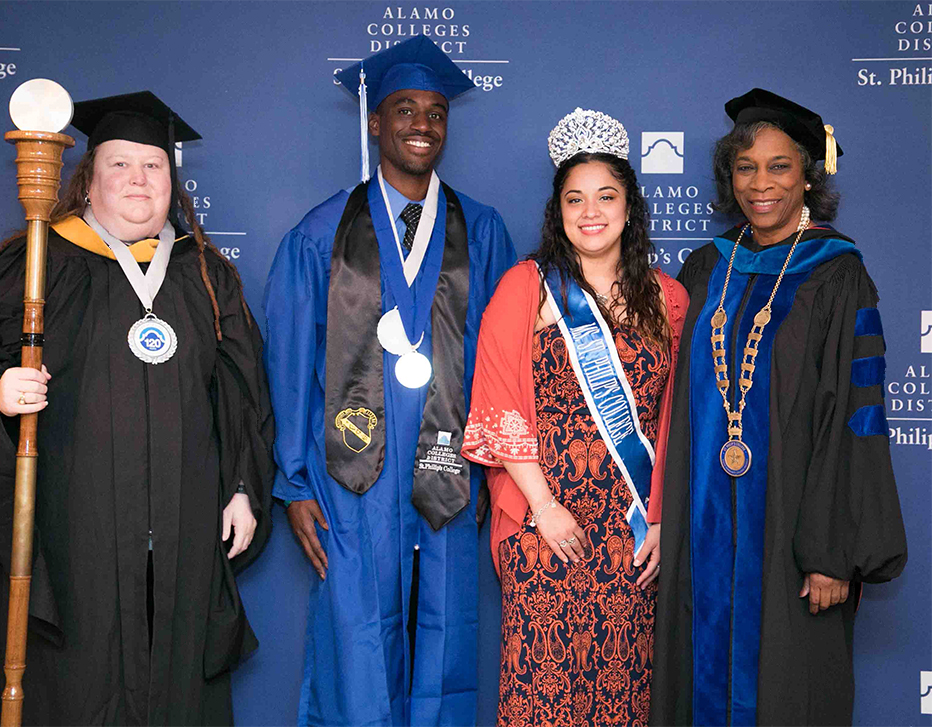 The first automotive technology student to represent the St. Philip’s College brand as Mr. St. Philip’s in the 120-year-old college’s history has passed the leadership responsibility on and is thriving in his quest to become a degreed engineer.

The history making alumnus is Terrell Thompson, a 2018 graduate of the college.

Thompson has far more than his degree in automotive technology and status as the college’s first automotive technology student to serve as Mr. St. Philip’s College from 2017-2018. He was the face of the college when it earned reaccreditation, a Governor’s Award for Performance Excellence (2018), and its share of the Malcolm Baldrige National Quality Award---a presidential level award earned in 2018. He is the face associated with the college that earned a high late 2018 evaluation among postsecondary institutions that confer the most degrees to students of color---the annual Top 100 Producers of Associate Degrees, 2018 report by Diverse: Issues In Higher Education.

During a national event with education as the central theme, Thompson was the “College King” who laid the college wreath at the city's MLK Wreath Laying Ceremony, standing patriotically before the bronze Martin Luther King Jr. Monument that was sculpted in 1981 by the decorated veteran and author Dr. Jose "Jacosta" Torres (1926-2015) of San Antonio at MLK Plaza. Thompson’s image with Dist. 2 Councilman William Shaw and graduating SPC student colleague Angelia Jacobs as ceremonial participants will be a signature element of the city web page https://www.sanantonio.gov/MLK for the major event for the 2018-2018 season.

A highly active member of the college's Collegiate 100 student branch of the 100 Black Men of San Antonio chapter, Thompson attended the Texas Male Student Leadership Summit at UT-Austin that is an invite-only event for institutional members of the Texas Education Consortium for Male Students of Color. He was on the college’s second team of students who learned and gave back through a unique free online academic service that uses the power of spoken and documented words to heal and change society. The name of the service that was part of Thompson’s college journey is the award winning HBCU Truth and Reconciliation Oral History Project https://hbcuoralhistoryvideoproject.org/. Thompson was part of a larger team that actually annually gives back by collecting the initial content for the innovative site, intended to provide users with full-length digital video clips and transcripts of interviews capturing both experiences of ethnic discrimination and its impacts on all. The project co-sponsored by seven Historically Black Colleges and Universities member institutions and two Texas independent universities is gaining a global audience after establishing in 2017 on a small scale in Texas. He traveled to the Houston-based Texas Southern University Law Center in order to gather some of the site’s first oral histories from the public.

When the college accepted $10, 000 for student tool scholarships from the organizers of CarFest at Aggie Park in 2017, Thompson was one of the students representing the department. When the college automotive department’s student organization earned athletics and student organization awards for the first time in 2017, Thompson was among the 125 student leaders recognized for earning a 3.0 or higher grade point average during the Fall 2017 semester while showing the high-performance college positively through co-curricular events. His college Tiger Techs team received awards for both creativity and spirit, and Thompson earned the college’s Most Outstanding Student Organization Leader of the Year award for the leader most present at events, meetings and activities for the organization, and for his role in the college's Collegiate 100 chapter.

"I had a lot of fun performing the duties of Homecoming King, but there are two moments that are special to me,” said Thompson. “One is the 2017 CultureFest. A very effective annual Fiesta season event that allows the students, faculty and staff to ‘kick back.’ At the same time, those who choose to can give back to the school and community with some service hours. The car show is by far my favorite thing about CultureFest. They put on demonstrations, so they can teach while showing off,” Thompson said.

“Another moment that sticks out is the 2018-2019 Homecoming Blue and White Alumni Mixer. Though I enjoyed being crowned [King] in the year prior, an irreplaceable feeling was left knowing that I was leaving St. Philip's College in the hands of its top-tier students. Meeting with the alumni from prior generations during Homecoming is always nice. It's a constant reminder, ‘there is nothing new under the sun.’ ” said Thompson.

While Thompson is off campus and engaged in new degree and leadership pursuits, the Alumni King hopes to attend the graduation ceremony for the degree he has earned from St. Philip’s College.

“I have obtained my associate degree from the Automotive Technology Degree program, and I am currently enrolled in a transfer program with The University of Texas at San Antonio where I look to get my bachelor’s in electrical engineering,” said Thompson.

All who would like to see what a graduation ceremony looks like for one of the colleges that confers the most degrees to students of color should attend the St. Philip’s College graduation ceremony that Thompson may attend on Dec. 14 at 7 p.m. in Freeman Coliseum at 3201 E. Houston St. (Image of Terrell Thompson at the MLK Wreath Laying Ceremony is a City of San Antonio image, all other images are SPC images by Julysa Sosa)