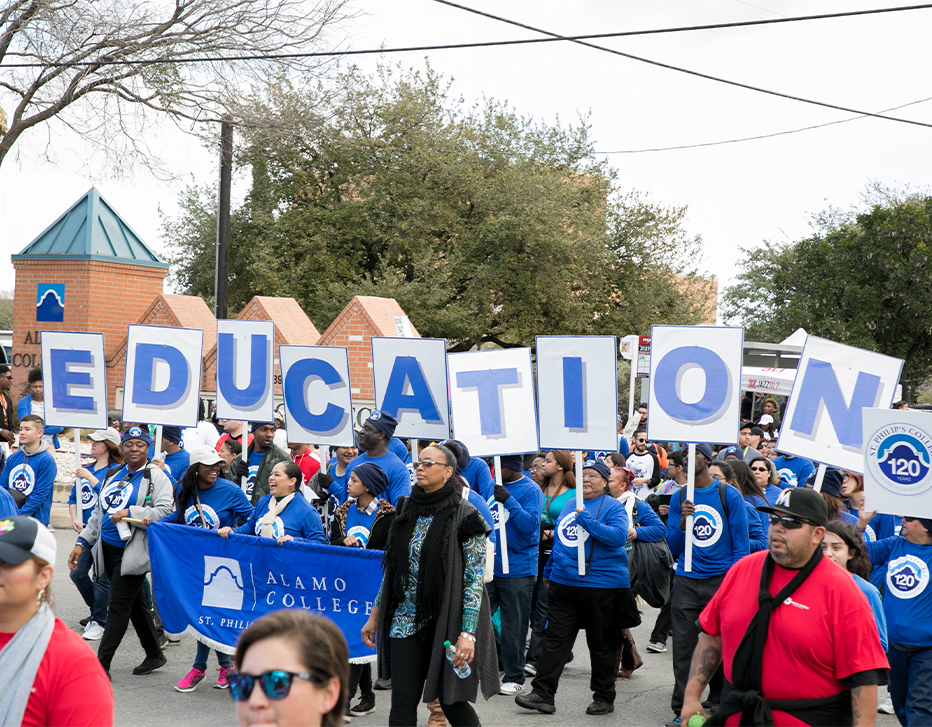 Online elements of St. Philip’s College plans for an extra King-sized lineup of patriotic, civic-friendly and service-based activities for the college’s 2019 Martin Luther King, Jr., Day of Service season are in full service at the new web page https://www.alamo.edu/spc/mlk-march/, giving a preview of program scope and online sign-ups for all who want to plan early to march-and-serve with the college in January.

The college will take time during the march this year to thank the community for serving as partners in such projects as helping St. Philip’s College bring a 2018 Governor’s Award for Performance Excellence to San Antonio, helping to return a combined $24 million to the bank accounts of San Antonio students, residents and small business owners from 2016-2018 as part of its free federal income tax preparation service, upgrading San Antonio’s $4 billion tourism community through the 2018 construction underway of a $30 million Tourism, Hospitality and Culinary Arts Center of Excellence, and employing the recent record numbers of graduates from the college that is a 2018-2019 nationally rated leader in graduating students of color. Keep an eye out for further details that will be announced and updated online in coming weeks, organizers shared this week.

Some traditional Martin Luther King, Jr., Day of Service events requiring considerable college support to ensure success are already part of the city’s 2019 e-calendar. Others are unfolding following separate college and city planning meetings that occur through January. New for 2019, in addition to acknowledging San Antonio for its role in the college’s Governor’s Award for Performance Excellence and other education achievements in the spirit of the MLK federal holiday season, the college is encouraging high school seniors who intend to enroll at the college to apply for the MLK and Dream Scholars Program scholarships long before the February 2019 deadline, and for local students to apply now to earn the St. Philip's College Associate of Applied Science in Information Technology Cybersecurity Specialist degree in San Antonio's historic first Pathways in Technology Early College High School, known as P-TECH at Sam Houston High School, 2019 site of the city’s premiere MLK youth event themed Living Life to the Fullest Youth Summit on Jan. 19 with details at the city’s 2019 MLK e-calendar. Other events with date and time elements of interest to all serving, giving back and celebrating education with St. Philip's College as a destination in 2019 include the city’s MLK Wreath-Laying Ceremony Jan. 19 at 2 p.m. at the Martin Luther King, Jr., Plaza at the intersection of E. Houston and N. New Braunfels St., and the city’s 2.7-mile-reported 300,000-person March with an 8 a.m. start time on Jan. 21, according to the city’s event calendar.

St. Philip's College would like to invite all to join the college's students at the city's MLK Wreath Laying Ceremony at the bronze Martin Luther King, Jr., Monument that was sculpted in 1981 by the decorated veteran and author Dr. Jose "Jacosta" Torres (1926-2015) at MLK Plaza. During a national seasonal holiday event with education as a central theme, 2018 automotive technology alumnus and 2017 Mr. St. Philip’s Terrell Thompson was the “College King” who laid the college wreath at the city's MLK Wreath Laying Ceremony, standing patriotically before the bronze monument. Thompson’s image at the monument site with Dist. 2 Councilman William Shaw, current MLK Commission leader Nate Davis and graduating SPC student colleagues Angelia Jacobs and alumni colleague Diondrick Sorrell as ceremonial participants is an inspiring signature element of the city web page https://www.sanantonio.gov/MLK for the major event for the 2018-2018 season.

Also announced or updated this week: