A team of four students from the exemplary-rated St. Philip's College Respiratory Care Technology associate degree program placed fifth in the premiere knowledge competition for therapists who care for patients with lung disorders.

The contest was a long day of visual and verbal medical questions that began at 9 a.m. and ended at 8:30 p.m. Each contestant held an electronic hand switch. An indicator system showed which member of two teams hand-switched first in order to answer each question. Once the switch was activated, a timing device allowed response windows of 10 seconds for initial answers, and 10 seconds when the same question was given to the opposing team. The top team in each event had the most points at the end of each 20-minute match.

"The competition was awesome!" Baker exclaimed.

In the final year of her respiratory care program experience, Level 2 respiratory care student Gabby Pearsons was one of the college's team members with control of an answer switch for the first time.

"So proud to be a part of 2018 Sputum Bowl. Great to be around other people who are in the same field, and to attend lectures relevant to our field," Pearsons emailed. "The day of the competition was amazing, just to be excited and represent my school up on the competition floor with my classmates," Pearson said. "We were so surprised that we knew all that we knew… if that makes sense. We felt underprepared, but in actuality, we held our own. We made it through four rounds and had a blast. From the experience, we became confident and also realized what we could suggest for the next group to do, to improve next year's odds," said Pearsons.

"I found out about the Sputum Bowl during my first year in respiratory school," said Pearsons. "Our professor talked about this opportunity where three students from Level 2 and two students from Level 1 in our program can participate in a trivia competition where all the questions are respiratory-related," Pearsons said.

"At the time, I was too intimidated to volunteer, and I regretted it. When I became a Level 2 and a spot on the team was available, I did not hesitate. Preparing for the Sputum Bowl consisted of reviewing questions ranging from history to managing airways and pharmacology. We practiced as a group, and really found out our strengths---in my case pediatric and neonatal---so I reviewed it all, but focused a little more on that population," Pearsons said.

"The Sputum bowl was and is a great opportunity to be involved in respiratory therapy. It helped me become immersed in the field that I am studying. It lit a spark in me to show that our program measures up to others," Pearsons concluded.

St. Philip's College's Sputum Bowl teams had placed as high as third-in-Texas on multiple occasions in previous years. A team of four St. Philip's College students even placed first in both the separate student and the practitioner categories in the state's Sputum Bowl when the 2010 Texas Society for Respiratory Care convention was held at the Crowne Plaza Hotel-Riverwalk in San Antonio.

Respiratory care technology program alumni Jessica Gamboa, Ioan Muresan, Shawn Deleon and Kristi Hagood emerged undefeated and ranked number one in Texas for the 2010-2011 season. Each member of this 8-0 championship team received a $500 stipend to compete in the national level Sputum Bowl at the 2010 American Association for Respiratory Care convention in Las Vegas that season, where they placed fifth in the college's last national appearance. That team began by defeating 15 student teams, and ended by defeating a team of respiratory therapy practitioners in the Texas finals. In the process those students became the association's first top-ranked respiratory students from St. Philip's College, and association student members of note going 8-and-0.

The Respiratory Care Technology program at St. Philip's College offers classroom, laboratory, and clinical experiences for the practice of respiratory care. Graduates receive an associate of applied science degree and are prepared for the registered respiratory therapist credential. The program is rated exemplary by the state of Texas. Find program details online at the college web page www.alamo.edu/spc/respiratory/.

Founded in 1947, the American Association for Respiratory Care is the global professional membership association for 52,000 respiratory therapists. The affiliate for this association in Texas is the society, which promotes both educational scholarship and wellness for patients with respiratory disease. 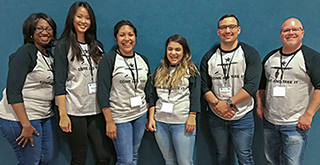