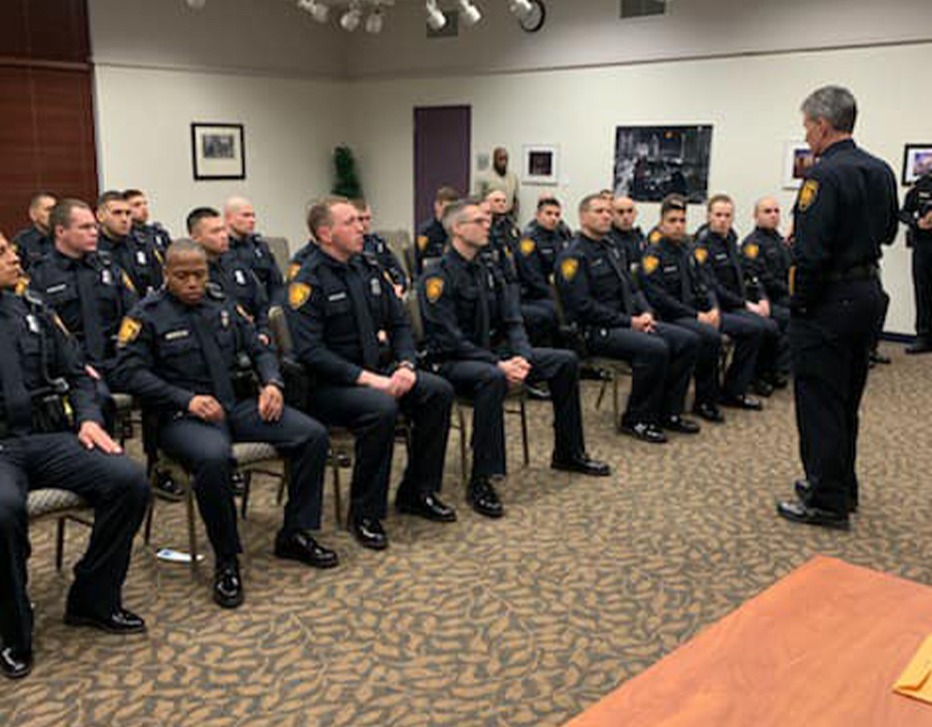 The St. Philip's College education partnership that supports law enforcement success with one of the nation's larger major city police departments saw its first event for 2019 late last week, and made a bit of national police-community history.

In addition to San Antonio Police Department recruiting events as a community partner, St. Philip's College hosts SAPD Academy cadet graduation ceremonies in the college's 600-seat Watson Fine Arts Center at 1801 Martin Luther King Drive. A potential source of SAPD candidates are alumni of the Criminal Justice Field of Study within the college's Public Service Institute, a program designed to provide students with a basic foundation in legal studies. Students will gain a broad understanding of the historical and philosophical basis of criminal law as well as the substantive and procedural aspects. The curriculum for this longstanding program has been approved by the Texas Higher Education Coordinating Board and is guaranteed to transfer to any criminal justice bachelor’s degree program in Texas Public Universities, according to the college program web page. For details, contact program director John James at jjames@alamo.edu, 210-486-2118.

The most recent academy ceremony---for SAPD Cadet Class 2018-CHARLIE---took place at the college on Feb. 22 with cadets and such authorities as SAPD Chief William McManus and City Manager Cheryl Sculley present. In terms of viewership, the academy ceremony is by far the largest social media event involving the college with 10,000 Facebook views reported for the May 2017 ceremony, more than 8,000 views for the Dec. 2018 event and a whopping 13,000 views as of this past weekend.

Cadet Class 2018-C celebrated Family Day at the department’s Training Academy Feb. 21, and their big day followed at the college on Feb. 22. History was made as this was the first police department class to graduate in partnership with a community college that has earned both the elite Texas Governor’s Award for Performance Excellence (2018) and the presidential level Malcolm Baldrige National Quality Award (2018), and event attendees enjoyed taking in a large sign thanking all for support in the performance excellence journey as they entered the facility.

Read a Feb. 22 WOAI report on the event at https://news4sanantonio.com/news/local/30-cadets-graduate-to-become-newest-san-antonio-police-officers. The department video for the event has been accessed more than 13,000 times, which is more than all other college videos combined in 2019.

According to the Feb. 22 WOAI report, “More than two dozen police officers are hitting the streets of San Antonio… The San Antonio Police Department held a cadet graduation at St. Philip's College for Cadet Class 2018-C… After seven months of training, 29 men and one woman received their badge and diploma, ready to start their careers in law enforcement.”

After completing the seven-month academic journey, each graduating cadet class fills street vacancies within the San Antonio Police Department, and the number of vacancies may diminish further following the Feb. 22 ceremony, according to event organizers.