A bevy of patriotic, civic-friendly and useful services and activities for the unique holiday optimized eventgoer destination experiences for individuals, families and groups 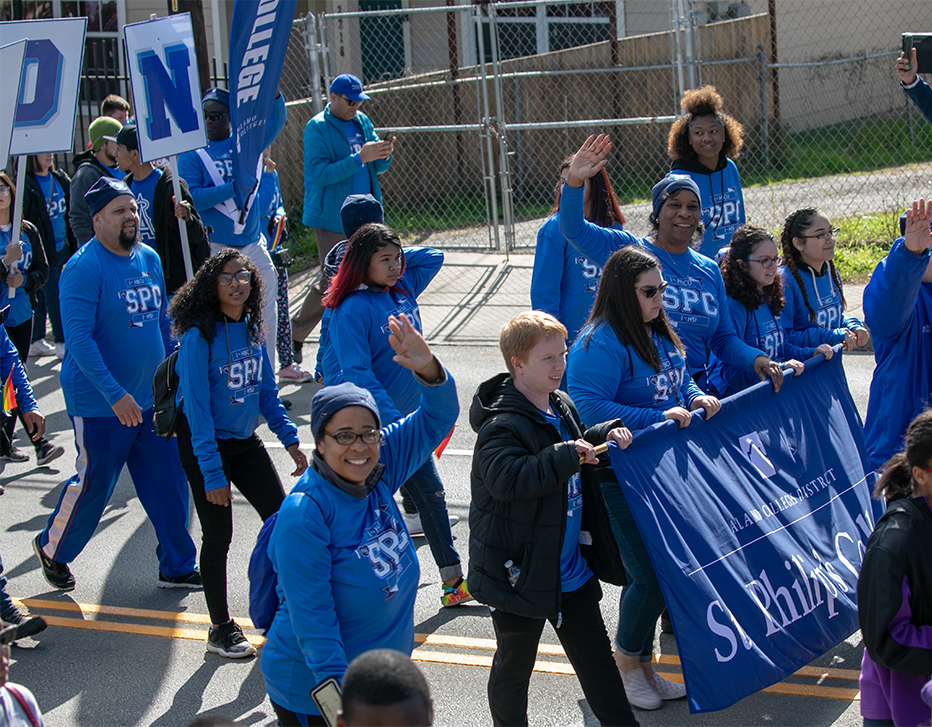 While individuals, families and groups optimized their destination experiences for the unique holiday thanks to SPC in general, behind the scenes, both the employees, students and alumni of the college enjoyed several days of service.

With performance excellence as the theme, on their march, marchers noticed a large banner discreetly expressing thanks for being valued members of the community when the college earned both its reaffirmation of accreditation and its 2018 Governor's Award for Performance Excellence and its fair share of the Malcolm Baldrige National Quality Award while embarking on $100 million in new construction and transformational capital improvements. The college is part of the first community college system to earn the presidential-level Baldrige award, and the banner display is part of the college’s campaign to express thanks to the community for hard work rendered, hard work underway and to come moving forward.

VIA Metropolitan Transit operated a park-and-ride site at St. Philip’s College for day of service march activities on Jan. 21 in college parking lots at 1801 Martin Luther King Drive. The following day which was also the start of the college’s first week of class, VIA announced excellent new win-win opportunities for St. Philips’ College students to ride at bargain rates.

St. Philip's College students were ceremonial participants in the city’s MLK Wreath-Laying Ceremony Jan. 19 at the Martin Luther King, Jr., Plaza at the intersection of E. Houston and N. New Braunfels St. The keynote speaker who students had the honor of hearing from was Dr. Colette Pierce Burnette, the first female president and chief executive officer of Huston-Tillotson University, Austin’s oldest institution of higher learning and only Historically Black College and University member institution. Although students were aware of the historic run of show for this event, the 2019 ceremony offered many surprises. Primarily, organizers displayed wreaths to symbolically represent the 30-plus year history of the march. More wreaths required at least 60 participants and filled the small footprint of the plaza as never before.

Cedric Dickerson is the first radiography technology student to represent the St. Philip’s College brand as Mr. St. Philip’s in the 120-year-old college’s history. He made his MLK holiday service debut with the college in recent days. He joined colleagues Keiko Stanberry (Ms. St. Philip’s) and alumna Angelia Jacobs (current Student Government Association President and former Alamo Colleges District Alternate Student Trustee) as ceremonial participants in the city’s largest MLK wreath laying ceremony to date. Jacobs had the pleasure of announcing on behalf of the college.

“The wreath laying went well. We found a wreath and waited for the speakers to finish. Someone announced, ‘Whoever wants to lay a wreath can line up.’ We were announced one by one. Keiko and I went with Angelia. Angelia said, ‘I'll announce you all,’ and we took it from there,” said Dickerson.

“The fact that it (the march) was bigger than I thought it was going to be was pretty cool,” said Dickerson. “Congressman (U.S. Rep. Will) Hurd's speech was really cool as well. The amount of participation was big. Even HEB was there, giving away free donuts and water bottles,” Dickerson said.

New for 2019, college Commercial Driver’s License Program volunteers served in college Parking Lot 10 at 1801 Martin Luther King Drive with a display of one 70-foot-long truck as they hosted informal truck selfie enthusiasts while sharing information on jobs in their industry. This on-campus service coincided with marchers passing college Parking Lot 10. All were welcome to circle back and visit Lot 10 for informal photos with the truck and the truckers up to 30 minutes after the march experience ended.

Because college Parking Lot 10 traditionally runs along the march route and is populated with an overflow of supporters, the lot also hosted press, bloggers and social media providers all reporting, interviewing, documenting and streaming live within the gathering at Lot 10 at various times in the program. The jazz staff at KRTU 91.7 FM provided a live broadcast service and hosted Trinity University alumni Jan. 21 at 10 a.m. at Lot 10 as station personnel paid tribute to the Dr. Martin Luther King, Jr., ideals through the programming of music. The broadcast is part of an ambitious annual weeklong KRTU project that listeners can still find active by following KRTU online.

The march requires many volunteers to set up. Mary Bozeman has been an academic program specialist at the college’s Tutoring and Technology Center since December of 2017, working part time at the college and part time at SAISD as a substitute teacher.

She spoke to a reporter as she helped the college set up for the march on Jan. 21.

According to the report, “Hundreds of people were pouring into the East Side early Monday morning around Martin Luther King Jr. Park, preparing for the annual events honoring the slain civil rights leader…. Mary Bozeman, 55, dressed warmly in African regalia, met with her contingent of 300 people from St. Philip’s College, ready to strike out on her second MLK March… “It’s the epitome and fiber of the Martin Luther King cause,” said the academic program specialist, as her fellow marchers arrived at the starting point. “In solidarity we walk.”

Exemplifying the SPC spirit, Bozeman was also warmly received by marchers in post-march mode in Pittman-Sullivan Park. Her college-branded attire sparked many questions about the college, mostly about degrees for well-paid jobs, but sometimes the marchers rapidly expressed amazement to her that St. Philip’s College is a Historically Black Colleges and Universities member institution and a Hispanic Serving Institution. In fact, several hundred of the nation's most prestigious colleges and universities educate while holding either HBCU or HSI status; St. Philip's College in the nation's largest Hispanic majority-population city is the nation's only institution to educate while holding both HBCU and HSI status.