ST. PHILIP'S COLLEGE, A 1966 VIA BUS AND AN ORIGINAL FREEDOM RIDER HELP SAN ANTONIANS CELEBRATE THE BIRTHDAY OF ICON ROSA PARKS ON FEB. 4---THE VIA BUS BECOMES A FREE TEACHING AID FOR THE PUBLIC FEB. 4-8 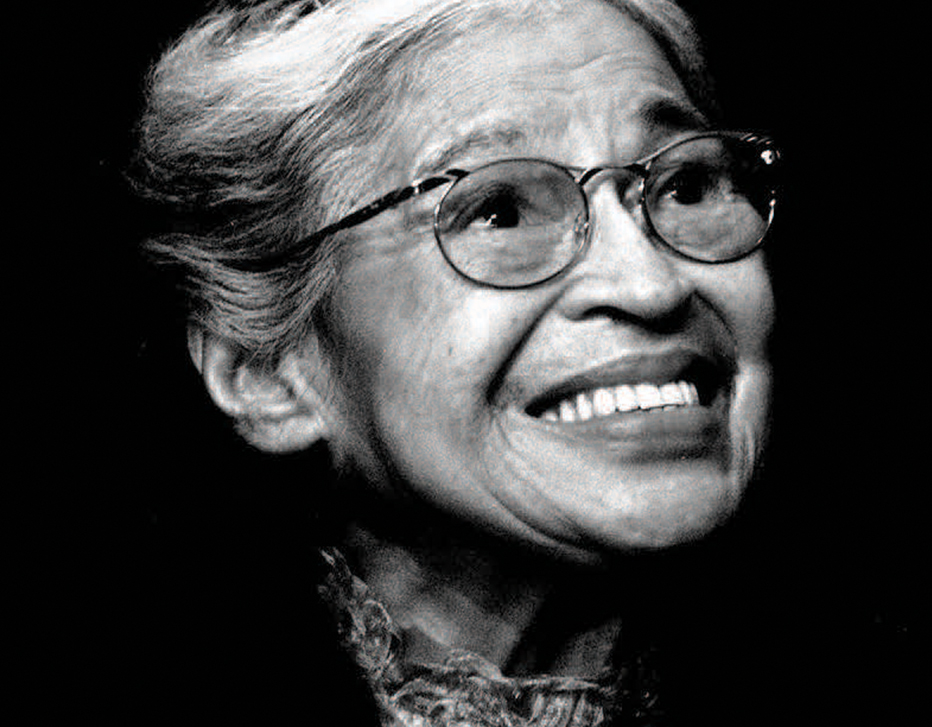 VIA Metropolitan Transit and an original Freedom Rider help San Antonians celebrate the 106th birthday of beloved civil rights activist Rosa Parks (1913-2005) with a history-steeped experience featuring a 40-foot-long vintage bus from the global Civil Rights Movement era that consists of free guided tours with free parking Feb. 4-6 from 10 a.m.-3 p.m. next to the Turbon Student Center at St. Philip's College at 1801 Martin Luther King Drive. The tours will be conducted by subject matter experts from VIA, the transit provider announced today.

All are welcome to attend VIA’s opening ceremony at the project site Feb. 4 (Rosa Parks’ birthday) at 1 p.m. next to the center. In addition to a vintage 1966 GM Dreamliner VIA bus that carried a group of Freedom Riders as ceremonial passengers in the city’s 2019 MLK March that the college provided VIA park and ride support for nine days ago, Freedom Rider Barbara Bowie will speak about her experience, and given Parks’ passion for education, VIA will also announce a contribution to the Dr. Bowie Scholarship Foundation, in memory of Ms. Bowie’s late spouse Dr. J.R. Bowie, III.

For the operating hours of the display Feb. 4-8 and details on the Feb. 4 opening event, contact VIA.

VIA and the college teamed up to honor civil rights activist Rosa Parks on what would have been her 106th birthday during this African-American History Month themed project anchored by the 59-year-old bus that is a piece of San Antonio history.

VIA invited Bowie to debut in an innovative MLK March tradition the transit provider started with Parks. Parks led the way by debuting at VIA’s invitation as a ceremonial guest in a 1954 Flexible Twin Coach VIA bus in 1987 as part of VIA’s participation in the MLK Jr. March---the first year the city sponsored the march as it presently does. Like the 1966 Dreamliner, that 65-year-old Flexible Twin Coach is among the jewels in VIA’s possession. In her way, Rosa rides the streets of the nation's seventh largest city every day, including stops at the college’s 1801 MLK Drive and 800 Quintana Road locations. Special Rosa Parks Seats were installed in VIA buses in 2005, and every VIA bus (510) has a special yellow seat designated in honor of Rosa Parks.

When Parks rode the VIA bus in the city’s first MLK March 32 years ago in 1987, she and the 1954 Flexible Twin Coach passed the campus of the college where her birthday and some of America’s greatest social achievements will be celebrated uniquely with a Freedom Rider present next week. Visitors can expect to share the site with college students in subjects that range from Diesel, automotive and collision and refinishing technology for the museum-quality vintage vehicle attraction to social and behavioral sciences for the social, ethical and historic learning opportunities the project offers.

From free passes for most students to serving as a park and ride special event site, St. Philip’s College has had an important relationship with the mass transit system of San Antonio for more than 100 years. The life of a former student at the college who also made local mass transit history in San Antonio is being celebrated this month. Reuben Benjamin Wesley (1933-2018) was the first black bus driver and first black supervisor for VIA and for the city of San Antonio, according to his obituary. He is also remembered by passengers for being a great conversationalist. Wesley was born in Marshall, Texas, and became “an alumnus of Phyllis Wheatley High School and attended St. Phillips College where he studied to be a tailor,” according to his recent online obituary. San Antonio deployed the first air-conditioned bus fleet in America in the late 1940s, and Wesley likely rode some of those segregated Flexible Twin Coach buses---without the Rosa Parks yellow seats---as a teenager during the World War II era. He may also have operated one of the Dreamliners on VIA routes as a driver. For 37 years, Wesley was employed by the San Antonio Transit System (1942-1977) that is the predecessor to today’s countywide 41-year-old VIA Metropolitan Transit system.

The year 1987 when Parks might have passed the campus was significant in that St. Philip’s College received its Historically Black College and University (HBCU) member institution designation from the federal government in 1987, two years into the leadership of Dr. Stephen Robert Mitchell (1931-2017), the first Anglo-American president at the college. A radiologic technology program faculty member suggested the HBCU designation as an institutional performance best practice upon returning from a field visit to the radiology program at Tuskegee Institute, an HBCU member institution in Parks’ hometown. VIA, the march and the college have grown to global reputations and regard since 1987.

When Bowie passed the college during the 2019 march, she likely noticed a large banner discreetly expressing thanks to all for being valued members of the community when the college earned both its reaffirmation of accreditation and its 2018 Governor's Award for Performance Excellence and its fair share of the Malcolm Baldrige National Quality Award while embarking on $100 million in new construction and transformational capital improvements. The college is part of the first community college system to earn the presidential-level Baldrige award, and the banner display is part of the college’s campaign to express thanks to community for hard work rendered, hard work underway and to come moving forward. Parks event guests will also be able to see the banner, and along with the VIA bus, the taking of selfies is encouraged.

Bowie’s announced return to St. Philip’s College for a history-steeped event is equal parts debut and homecoming. She provided insights into the Freedom Rider experience in 2011.

"I was in the Trailways station in Jackson, Miss., in 1961 when police locked the Freedom Riders including my brother in the death row area of a state penitentiary," Bowie recalled. "The penitentiary jailers did things to them that were far from honorable for 40 days and nights. Today, each 1961 Rider has a place in the history of civil rights,” Bowie said in 2011.

According to a Jan. 19, 2018 report on Bowie, the city’s 2018 MLK March and the 1966 VIA bus by the San Antonio College Ranger reporting team of writer Kimberly Caballero and photographer Lorena Torres Romero, “During the mid-1960s, Bowie sat in a whites-only section at the front of a bus and resisted moving in spite of a white man verbally harassing her to do so. The other whites on there looked at me with some sense of approval because I did not respond. I was scared … but I didn’t show any fear,” Bowie said.”… Bowie said this bus brought tears to her eyes because it reminded her of when she was a kid and got harassed by a white man when she and her mother where seated in a white-only section.”

All are welcome to view a college companion piece to the VIA exhibition, a mural created during the historic first NAACP National Convention in San Antonio (2018) for display during voting awareness events at St. Philip's College’s Turbon Student Center that will help prospective voters brush up on unity and diversity. The mural artist is Yocelyn Riojas and her African-American Heritage Month debut project at the college as an artist-in-residence at the Austin-based organization Jolt Texas is themed Diversity is Resistance. The pre-and-post viewing experience of Diversity is Resistance in the college’s Turbon Student Center can be enhanced by viewing the artist's work online, and thinking about diversity and voting, Rosa Parks and Freedom Riders in new, personal ways. The signature work of Riojas is an event anchor piece that will also provide inspiration during the Rosa Parks, Walk on the River and Truth and Reconciliation Oral History Project debut events for the observance.

With all event times, dates and appearances subject to changes that will be shared online, all are welcome to attend the following 2019 observance events, and visit the web page for updates:

All events are open to the public, and parking is free for all events. For information, contact observance team lead Dr. Sharon Crockett-Ray at 210-486-2887. (Archival images of 1987 MLK March courtesy UTSA libraries)

About Rosa Parks: Rosa Louise Parks (1913-2005) is globally recognized as the “mother of the modern day civil rights movement” in America. The recipient of nearly 45 honorary doctorate degrees and the author of four books is also the 1996 recipient of the federal government’s Medal of Freedom that is the highest award bestowed to such civilian citizens as Caesar Chavez and she was voted by Time Magazine as one of the 100 most Influential people of the 20th century. Her lifetime was one of giving back as a career congressional staffer and speaker who promoted the energy of young people as a force for change. Her decision not to surrender her seat to an Anglo-American male passenger on a Montgomery, Ala., bus on Dec. 1 of 1955 triggered protest within 96 hours and changed the Americas---particularly the U.S.---in its view of people of color and redirected the course of history for many. The dignified Tuskegee, Ala., native worked in the NAACP’s youth programs and was active in the Episcopal Church. After her arrest, people of Montgomery organized and promoted a 381-day boycott of the city bus line. Dr. Martin Luther King, Jr., himself was appointed the spokesperson for the Bus Boycott and taught nonviolence to all participants. Sit-ins, eat-ins, swim-ins, and similar causes went viral in the U.S. to demand what should have been a given: equal rights for all people in both the public and private sectors.