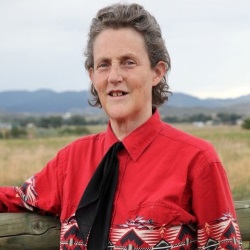 St. Philip’s College will host Dr. Temple Grandin, a well-known animal behavior scientist and autism self-advocate, in a virtual Zoom presentation on Friday, February 12, 2021, from 11:30 AM - 12:30 PM. Temple Grandin, who was diagnosed with autism as a child, will share about how her mind works and discuss the different approaches to learning - such as her ability to "think in pictures," which helps her solve problems that neurotypical brains might miss. She will also speak on how the detail-oriented minds of the autism spectrum vary by explaining what she has learned to be the three different types of specialized thinking: visual thinking; music and math thinking and; verbal logic thinking.

Temple Grandin was born on August 29, 1947, in Boston, Massachusetts. She has become a leading advocate for autistic communities and has also written books and provided consultation on the humane treatment of animals. At the age of 2, Grandin was diagnosed with autism, considered a form of brain damage at the time. Her treatments included extensive speech therapy, which helped to draw out and reinforce Grandin’s communicative abilities.

Grandin began to speak at the age of 4. Although her parents sought the best possible teachers, social interactions remained difficult in middle and high school, where other students teased Grandin regularly for her verbal tics. Despite these difficulties, Grandin achieved considerable academic success. She earned a degree in psychology from Franklin Pierce College in 1970, followed by a master's degree in animal science from Arizona State University and a doctoral degree in animal science from the University of Illinois at Urbana-Champaign. She then worked as a consultant to companies with large animal slaughterhouse operations, advising them on ways of improving the quality of life of their cattle.

Grandin became nationally known after appearing in Oliver Sacks's 1995 book, An Anthropologist on Mars, the title of which is derived from Grandin's description of how she feels in social settings. By that time, she had already made a name for herself in autism advocacy circles. Grandin first spoke publicly about autism in the 1980s, at the request of one of the founders of the Autism Society of America. In addition to autism advocacy, Grandin is well known for her work regarding animal welfare, neurology and philosophy. Her books, including Animals in Translation and Animals Make Us Human, have garnered critical acclaim.

Grandin's willingness to work with fast-food companies and other slaughterhouse owners is controversial within the animal rights community. In her books, Grandin makes the case that the alleviation of anxiety, rather than the maximum extension of life, should be the priority for those keeping any animals. She notes the high degree of anxiety suffered by domestic animals left for long periods of time without human or animal interaction as an example of the ways in which animal welfare is neglected outside of the slaughterhouse.

Grandin has taken strong positions on autism and the education of autistic children. She advocates early intervention, including the training of teachers to direct each child’s specific fixations. She is a champion of “neurodiversity” and has opposed the notion of a comprehensive cure for autism. She argues that her contributions to the field of animal welfare would not have been possible without the insights and sensitivities that are a consequence of her autism.