The enactment of Title IX in 1972, which guaranteed the right to an education free from sex discrimination, had a lasting impact on women pursuing higher education and completing college degrees. Since the ratification of Title IX, women have consistently outpaced men in earning that same level of education as reported by the National Center for Education Statistics.

The 1981-82 academic school year was the first time women received more postsecondary degrees than men, according to NCES. From then on, women across higher education graduation rates have shown consistent growth.

In 1898, before the rise of women receiving a formal education, St. Philip’s College was established by James Steptoe Johnston, a bishop of St. Philip’s Episcopal Church of the West Texas Diocese. St. Philip’s Normal and Industrial School was designed to educate and train recently emancipated slaves. The school began as a weekend sewing class for six black girls.

Later in 1902, Artemisia Bowden joined the school as administrator and teacher and served St. Philip’s College for 52 years. Under her visionary leadership, the school grew from an industrial school for girls into a high school, later a junior college, and today as part of the Alamo Colleges District. Miss Bowden grew the capacity of the talent pool and extended the life expectancy of the institution.

The foundation of St. Philip’s College as an all-girl school has reflected the consistent rates of high female enrollment and degree completion for the majority of its existence. However, in recent years and unlike national trends, St. Philip’s College has experienced a rise in the completion of degrees and certificates by male students, specifically between the years of 2015-2020 as shown below. 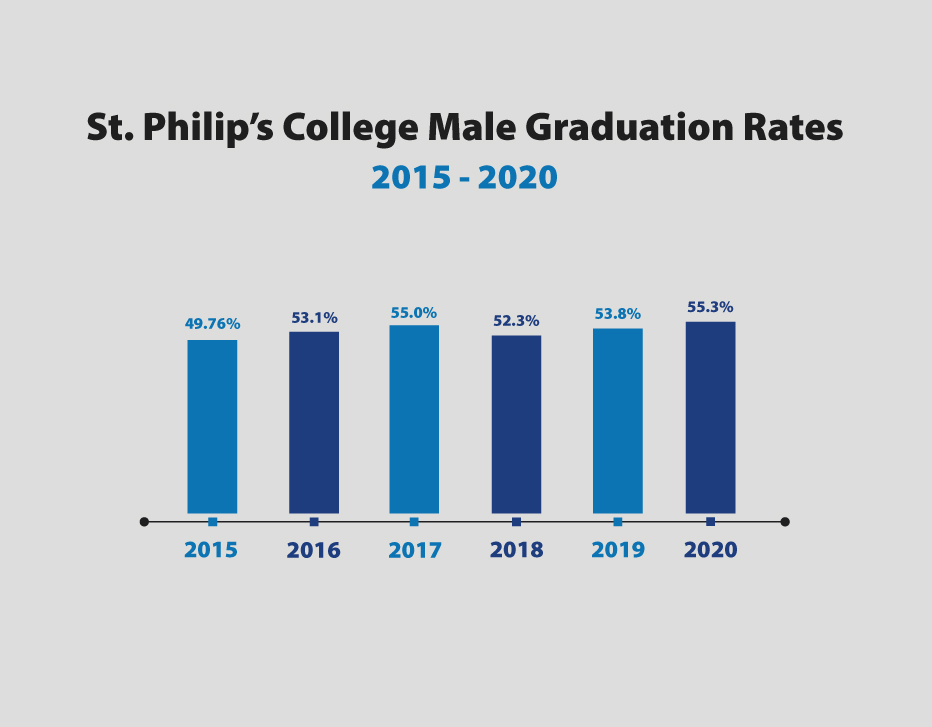 “We don’t rely on a one-size-fits-all support system for students. We meet each student where he or she is and we curate a network that addresses the individual’s needs. We’ve implemented two experiential programs in the last five years that have had a great impact on persistence. Both are targeted, but not limited to, male students – Men of Color and Collegiate 100. Each provides active students with mentors, networking and community engagement. Each is impactful here at St. Philip’s College and beyond because of the potential to make lifelong relationships with leaders here and in the community,” explained SPC President Dr. Adena Williams Loston.

In addition to the increase of male graduates, St. Philip’s College holds the largest percentage of male student enrollment across the Alamo Colleges District, at 41.47% as of Fall 2020. Most St. Philip’s College male students are pursuing degrees in Biology, Liberal Arts, Business Administration, Automotive Technology, and IT Cybersecurity. Between Fall 2019 and Summer 2021, the five programs reported the highest number of male student enrollment.

In 123 years, St. Philip’s College has grown to offer over 100 programs. Although the earliest lessons taught at St. Philip’s were sewing, the purpose of the College has remained the same in teaching leadership and marketable skills.

For more information on the history of St. Philip’s College, click here.