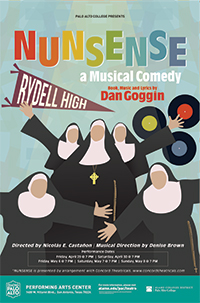 Due to a calamitous culinary catastrophe, the Little Sisters of Hoboken have run out of money to bury the last of their dead sisters. So, they are putting on a musical spectacular to raise enough funds to send them to their heavenly reward. Catch the show and watch all the Nunsense unfold!

Please e-mail ncastanon3@alamo.edu for any questions. Box Office Staff will open the Box Office one hour prior to curtain.

Tickets
10 minutes after curtain, tickets will no longer be sold.
Tickets are only valid on the printed date.

COVID Protocol
The health and wellness of students and staff of Alamo Colleges District is our highest priority. Out of an abundance of caution, the Alamo Colleges District has made changes to the way we provide instruction and operate in light of the growing concerns related to the coronavirus.
For further information on PAC’s Return to Campus Plan, please click here.
• Face coverings are strongly encouraged but not required for everyone on campus.
• Seating will be limited to 100 patrons per performance.
• Social distancing will be followed.
• Health screening, including temperature checks are required upon arrival to any Alamo Colleges District Location.

Seating
Patrons arriving late will be seated at the House Manager’s discretion.
There is not late seating in the Black Box Theatre.
All seats are general admission.