A self-described ‘activist behind the scenes,’ Anna Uriegas Bustamante has spent the majority of her life advocating for her community and educating future generations. She has been an educator in the Southside Independent School District (SISD) for 35 years and has served on the Alamo Colleges District Board of Trustees since 2008.

The second oldest of six children, Bustamante grew up in a musical household. Both her parents played accordion and loved to sing.  Her father performed as an accordionist, bajo sexto player and vocalist in a Conjunto group for 40 years.  Naturally, Bustamante followed in their musical footsteps by becoming the choir director at her church and forming a mariachi group at her high school while still a SAC student. 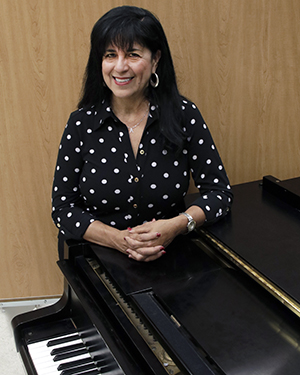 Today, Bustamante teaches classical guitar and leads the mariachi and Conjunto programs at her alma mater, Southside High School, where she has been for nine years. Before that, she taught music education and bilingual education at the elementary school for about 25 years. While she loves to teach, she also loves to perform and frequently entertains alongside her pupils. In addition to being a vocalist, Bustamante plays trumpet, classical guitar, and some piano.

Bustamante came to San Antonio College in the fall semester of 1976 and stayed for about two years, before transferring to Texas A&I University in Kingsville where she earned a bachelor’s degree in elementary education and music and a master’s degree in educational leadership. “I didn’t know of any other choices—but I knew that if I wanted to become a teacher, I would have to attend college.”

Bustamante claims that her experience at San Antonio College had a transformational change on the trajectory of her life. According to Bustamante, SAC was the only institute of higher learning offering mariachi as a credit course at that time.  Bustamante and others were encouraged to transfer to Texas A&I University-Kingsville to join the SAC mariachi director as he established a mariachi program at the university. While at A&I, she performed with the university group Mariachi Javelina and the professional group Mariachi Ortiz, which has the distinction of being the first mariachi to play on the steps of the U.S. Capitol building. Although she transferred to A&I before graduating from SAC, Bustamante proudly received a reverse transfer associates degree during SAC’s 2016 Commencement Ceremony.

Her passion for music is matched with her passion for serving her community and speaking up for underrepresented people. Now in her third term on the Alamo Colleges District Board of Trustees, Bustamante represents District 3 which includes parts of the downtown and King William areas and the South and Southeast parts of Bexar County up to the Atascosa and Wilson county lines.

Gearing up for her 37th year of teaching, Bustamante stays busy with the Alamo Colleges Board and El Carmen Catholic Church where she has been part of their music ministry, along with her siblings, for 42 years. Bustamante has one son, Alejandro, who is currently in college studying accounting.