A Long Journey of Courage, Optimism, and Hope 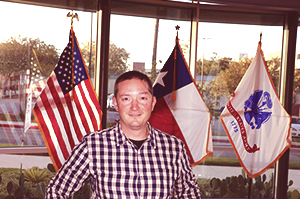 When Jeff Long courageously told his parents that he wanted to join the United States Army, his father had a rather passionate response, "Why didn't you just get a ______ job?"

The son of an Army veteran, Long had some idea of what his journey might entail. His father before him had served the country and bravely defended freedom many years. But, even he could not predict what events were in store.

In hindsight, Long says he may have done some things differently but says, "I feel blessed because I have been given an opportunity to succeed."

The Call to Serve
Now 35 years old, a younger Long graduated from high school in 2001. Born and raised in Kingwood, Texas, he decided to attend the University of North Texas (UNT) in Denton with his best friend at the time. After being called home after the first year, Long continued his studies at Lone Star Community College for a semester before transferring to Texas State University in San Marcos.

Like many young college students, Long was not certain about his career path, but his interest in joining the Army intensified during his first year of college when the nation endured the single most deadliest terrorist attack on American soil—9/11.

Long recalls watching the second plane hit the South Tower of the World Trade Center and feeling a call to serve. However, he stayed enrolled in college and graduated with a degree in biology before joining the military.

Becoming Airborne
Choosing the Army was an easy decision for Long. His father enlisted in the Army before the draft and served in the Vietnam War. However, unlike his dad, Long did not have the imminent threat of the draft looming which may explain his father's initial shock of Long's decision to enlist.

Long chose to enlist in the infantry. Although, as a college graduate, he could have enrolled for officer training. He felt he needed to pay his dues before he could begin telling soldiers what to do.

For six years and six months, Long served in the Army taking on several roles and serving as a medic in the 82nd Airborne. During his service abroad in Afghanistan, he was part of Bravo Company. However, it was not until he returned stateside that he would endure a traumatic brain injury.

A Metal Plate
While enjoying a recreational drive on his Harley, Long had a motorcycle accident that left him in a medically induced coma for about six months from late 2013 through early 2014.

"Do you have good ears?" asks Long as he pauses to knock on his skull with his knuckles. He points to the entire left side of his head. "That's a metal plate."

While he can joke about it now, Long has few memories from that time. After awaking from the coma, Long had post traumatic amnesia and could barely remember his own family members, much less any details from the accident.

A Different Ballgame
Shortly after the accident, Long received an honorable discharge from the Army at the end of his service contract. Still on the long road to recovery, Long was now faced with the transition from soldier to civilian.

"Returning to life was a whole different ballgame," he recalled.

In time, Long decided to take advantage of the veteran benefits for vocational rehabilitation. With his experience as a medic, he took the advice of an advisor at San Antonio College and decided to enroll in the Military to R.N. Associate of Arts in Science degree in the Nursing Education department. While he ultimately decided to pursue a different pathway offered at SAC's sister school, Northwest Vista College, Long continued to take courses at SAC and says he is still very connected to the SAC community.

"San Antonio College has been welcoming with open arms," he claims.

Currently a work-study student in SAC's new Victory Center for veterans and active duty personnel, Long works in the Transition Assistance Center helping people interested in utilizing VA benefits to attend school. As well, he lives at the Tobin Lofts student-housing complex because it is affordable and is close to the SAC campus.

After earning his associate degree in pharmacy technology in May 2019, Long plans to enroll once again at Texas State to pursue a master's degree in healthcare administration.

While he may have had a long journey to be where he is at now, Long is determined to follow through with his goals. For now, he remains grateful and is looking forward to the future with excitement for what's to come, pride for what he has accomplished in spite of it all, and, most importantly, hope for new relationships, love, and family.