Eleanor Alvarez had just about given up.

After earning her GED in 2009, she completed a trade school program for a medical front office certification. After several unsuccessful job interviews, one interviewer told her she would pose a risk to their company. 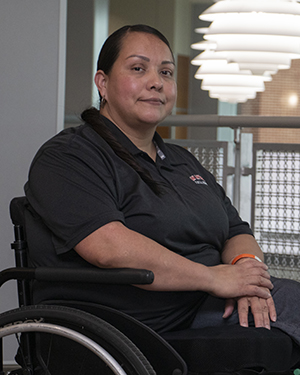 Alvarez uses a wheelchair as a result of a car accident.

“When that happened I got depressed. I wasn’t pursuing anything,” she said. “I just stayed at home and continued watching my kids.”

She was receiving assistance through the San Antonio Housing Authority. When her caseworker told her about a four-week training in clerical work through San Antonio College’s Empowerment Center, it reignited her desire to do more with her life.

Saying yes to that course was a turning point for Alvarez and the beginning of a long relationship with the Empowerment Center.

Support to move forward
When she realized that the center could help her with the enrollment process, she decided to pursue a degree. Still, beginning college in her thirties as a mother of two young children and a wheelchair user was daunting.

“I was really scared and nervous about coming to college with all these young kids, and not only that, but with a physical disability. It was a little overwhelming,” Alvarez said.

The center became her support system. A dedicated advisor offered career counseling and helped her plan her education. Center staff also helped her secure scholarships, find childcare, get textbooks, even print out assignments. When a serious illness interrupted her education for two years, her Empowerment Center team helped her re-enroll.

Alvarez graduated from SAC in 2018 with an associate of applied science degree with administrative assistant level one and two certificates, completing work/study programs along the way. Today she works at SAC as an administrative service specialist for the deans of Student Success, where she regularly refers students to the Empowerment Center.

Recruiting the overlooked
It was no accident that Alvarez found her first training program at SAC. The Empowerment Center focuses on recruiting non-traditional students, including those who either never considered college an option or who had given up on college dreams. 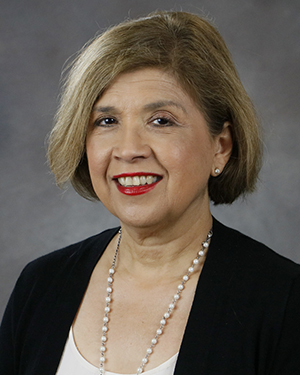 “We actively go out and reach out to these populations that ordinarily would not be reached out to. It’s very intentional.”

The center has a dedicated outreach coordinator who recruits economically disadvantaged students from a variety of sources, including local non-profit groups, women’s shelters and homeless services.

One of the center’s main recruitment programs is its annual WE: Women Empowered Conference, which will mark its 20th anniversary when it convenes May 22, 2022.

The conference brings together 400 women with either GEDs or high school diplomas for a day of inspiring speakers, information on enrolling in college, workshops on topics such as financial literacy and building confidence, and even the chance to apply for scholarships. The conference is designed to end by 2 p.m. so mothers can pick up their kids from school. 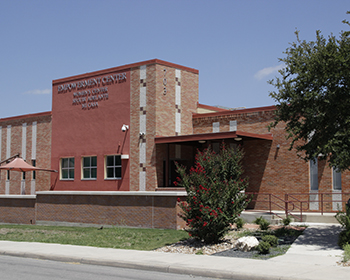 The Empowerment Center staff understands the challenges non-traditional students face, including housing, money, childcare, and transportation. Their goal is to help all students get the resources they need to succeed.

And their active support gives students like Alvarez the opportunity to change their lives for the better.

“They helped me throughout college, from 2011 all the way to the time I graduated,” Alvarez said. “They’ve done so much for me, I can’t thank them enough.”