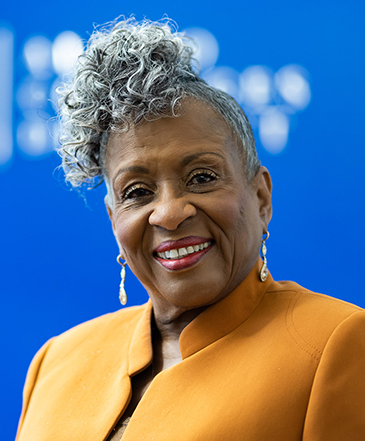 rs. Ray is a native-born resident of San Antonio, Texas, and has lived in District 2 of Alamo Colleges all of her life. She retired from Kelly Air Force Base as a Senior Official after 27 years of service. She headed the Division with the largest organizational budget at Kelly AFB (over $1.7 Billion dollars) with regulatory and human resource responsibility for a 2,500 person workforce. After retirement, she served her community as a volunteer on various governance Boards at the State, County and City levels. She has been Fiesta, San Antonio Commission President as well as the MLK March and Commission, Chairs. These are the two largest, most diverse, peaceful, organized gatherings of our citizens in the State (both of which are volunteer-driven).

She has served the Alamo Colleges for thirteen (13) years, as a volunteer, elected by her fellow, Countywide committeemen, to Chair every Citizen’s Advisory Committee overseeing Capital Improvement Projects for the District during that time period. In that capacity, and under her leadership, the District ushered in over $1 Billion in improvements for every campus in the District. She also chaired the Citizens Advisory Committee that oversaw the planning and building of the Alamo Colleges new headquarters building projected to serve the District for the next hundred years. After years of planning and collaboration with community stakeholders, the Grand Opening was held in July of 2019.

Mrs. Ray was inducted into the San Antonio Women’s Hall of Fame in the category of “Volunteerism”. She has been a member of St. Paul UMC for over 38 years where she has served as Youth Coordinator, Bible Teacher (for both Children and Adults); Chair of Evangelism/Christian Unity and Interreligious Concerns. Mrs. Ray was St. Paul's “Woman of the Year in 2006”. She is the widow of Howard T. Ray, a highly decorated US Army veteran. They have a blended family of seven (7) children; 16 grandchildren and 14 great-grandchildren.